Capt. George Harvey was Killed in Action during the United States Civil War.

It is possible that an 1860 US Census record from Parke County, Indiana could be him and his wife Martha, with two children: [4]

He was a young farmer at the start of the Civil War, and enlisted on September 15, 1861, He was mustered into the Union Army as a Captain of Company I, 31st Indiana Volunteer Infantry.[5][6] After participating in the battles of Fort Henry and Donelson in the spring of 1862, he was killed on the first day of the Battle of Shiloh, 6 Apr 1862, in Tennessee. His wife applied for and received a widow's pension in 1863.[7] She never remarried after his death, and lived in Danville, Indiana until her death.

He and his wife are mentioned in a marriage certificate for Otis C. Hadley and an un-listed female, presumably Mary T. Harvey. The marriage log lists the names of the bride's father and mother, but curiously, not the bride's name.[8] 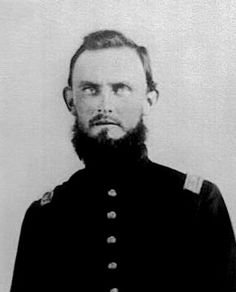 George is 18 degrees from Katie Goodwin, 17 degrees from Wilbur Scoville and 15 degrees from Henry VIII of England on our single family tree. Login to find your connection.