There is some conflicting evidence about John's father. In an 1888 genealogical journal, it was conjectured that John Harwood is the son of George Harwood, the first Treasurer of the Massachusetts Company. [1] However, another source specifically about the Harwoods of Boston [2], list him as son of John Harwood of London and sibling of Nathaniel, Thomas and Hannah, all of Boston Massachusetts, which accords with his Will. In addition, the source confirms John being in Boston from 1646 to 1661, which accords with other records quoted in the Journal article.

He is likely to be the John Harwood admitted to First Church December 25 1647, when he was described as a taylor. [3]

Whatever the case, he and Elizabeth married, presumably in Massachusetts, and had three children there between 1650 and 1655. [4]

It is said he sold his estate in America in 1657. By 1666, John is listed as leasing a home in Bednall Green, on which he was paying tax for five hearths.[5] They are recorded leasing that particular house for about three years. [6]They are consistently said to have lived in Bednall Green.

He left to wife Elizabeth, tenements in St George's Lane and Pudding Lane which he leased from the company of fishmongers and two messuages in Pudding Lane which he held by lease from Christ's Church Hospital. He also left a messuage near the Monument in London to his son Jacob Harwood and another to his son Joseph Harwood upon the decease of his wife. He left the three houses in St George's Lane to his daughter Elizabeth Sedgwick, now in New England, and her son Samuel. There is also mention of his daughter Hannah Manwaring and her daughter Elizabeth, son Joseph's wife Elizabeth, brother Thomas Harwood of New England and Nathaniel Harwood of New England.

Images: 2
John Harwood entry in "The Harwood Family in England and America" 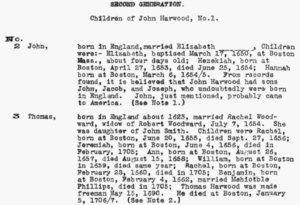