Nathaniel Hathorne chose a life at sea. He sailed aboard the America in the late 1780s, aboard the Perseverance, a ship owned by his brother-in-law, Simon Forrester, in 1796. Nathaniel Hathorne married Elizabeth Clarke Manning who lived a block away on Herbert St., on August 2, 1801.

Their first child, Elizabeth, born on March 7, 1802, and their second child, Nathaniel, born on July 4, 1804, were both born while Hathorne was on a sea voyage.

Hathorne returned later in 1804, having achieved the rank of Captain, and was inducted into the East Indian Marine Society in November of that year. He sailed on this last voyage on December 28, 1807, on the Nabby bound for Surinam, or Dutch Guiana.

Less than a month later, on January 9, 1808, his wife gave birth to Maria Louisa. A few months later, in early April of 1808, she received the news of her husband's death from yellow fever in Suriname. 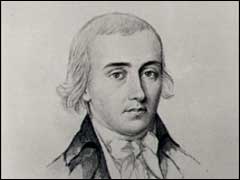