Barbara (Hauer) Fritchie, Civil War Hero. At ninety-five years of age she reputedly defied the Confederate troops under Stonewall Jackson as they advanced through Frederick, Maryland. Her memory has been preserved in poem entitled "Barbara Frietchie" by John Greenleaf Whittier in 1864: "Shoot, if you must, this old gray head, But spare your country's flag," she said. A shade of sadness, a blush of shame, Over the face of the leader came; The nobler nature within him stirred To life at that woman's deed and word; "Who touches a hair of yon gray head Dies like a dog! March on!" he said. Again in a play by that same title by Clyde Fitch in 1899 where he takes artistic liberty and intertwines her story with that of his own grandparents' love story, which also takes place during the Civil War. She was born Barbara Hauer in Lancaster, Pennsylvania and was married to John Casper Fritchie, a glove maker, on May 6, 1806. She was a personal friend of Francis Scott Key and they participated together in a memorial service at Frederick when George Washington died. When Winston Churchill passed through Frederick in 1943, he stopped at the house and recited the poem from memory. Her house is preserved as a museum on West Patrick Street in Frederick, Maryland to this day. (bio by: D C McJonathan-Swarm)

Poem by John G. Whitter about Barbara Fritchie and her protection the union Flag from Rebels in Frederick in Sept. 1862. Whitter stated: “the only thing he had written for the truth that he could not vouch” His poem written in 1864.

Barbara’s father: Nicholas Hauer, born in Nassau-Saar-brucken, in Dillendorf, Aug. 6, 1733, who left Germany May 11, 1754, and arrived in Pennsylvania October 1, of the same year. Mother’s name Catherine. Barbara was born in Lancaster, Pa., where her father first settled, on the 3d of December, 1766. Moved to Frederick before 1783. Barbara remembers when Geo. Washington came to Frederick in 1791.

Barbara at age 95 and nine months had kept her flag outside the top window since the previous winter. Confederate Stonewall Jackson and troops marching through Frederick Sept. 6, 1862. HOWEVER, his troops may never have actually fired on the flag or Barbara. Nothing was known or said about Jackson's ordering his troops to fire. The troops fired; Barbara waved the flag which the firing threw down, reproaching the men for their disloyalty, and the stern voice of the general cried, " March on ! "

Barbara died 3 ½ months after the event on Dec. 18,1862. A great nephew at Barbara’s funeral heard about a flag story, told it to his brother later in Washington, DC (who was a real estate agent) who then told the story to Mrs. Eden Southworth, of Washington DC, a writer of stories. Southworth, using some imagination, wrote the story to her friend, Whittier. He embellished it more.

Is Barbara your ancestor? Please don't go away!

ask our community of genealogists a question.
Sponsored Search by Ancestry.com
DNA Connections
It may be possible to confirm family relationships with Barbara by comparing test results with other carriers of her ancestors' mitochondrial DNA. However, there are no known mtDNA test-takers in her direct maternal line. It is likely that these autosomal DNA test-takers will share some percentage of DNA with Barbara: 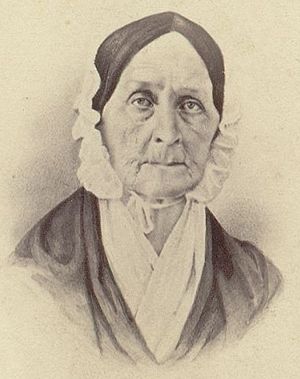 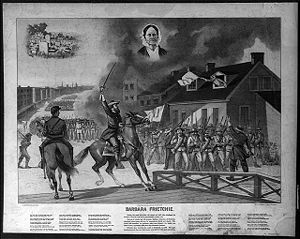