Rutherford Birchard Hayes (October 4, 1822 – January 17, 1893) was the 19th President of the United States (1877–1881). As president, he oversaw the end of Reconstruction and the United States' entry into the Second Industrial Revolution. Hayes was a reformer who began the efforts that led to civil service reform and attempted, unsuccessfully, to reconcile the divisions that had led to the American Civil War fifteen years earlier.

Born in Delaware, Ohio, Hayes practiced law in Lower Sandusky (now Fremont) and was city solicitor of Cincinnati from 1858 to 1861. After the Civil War, he served in the U.S. Congress from 1865 to 1867 as a Republican. Hayes left Congress to run for Governor of Ohio and was elected to two consecutive terms, serving from 1868 to 1872. After his second term had ended, he resumed the practice of law for a time, but returned to politics in 1876 to serve a third term as governor.

Beneficiary of the most fiercely disputed election in American history, Rutherford B. Hayes brought to the Executive Mansion dignity, honesty, and moderate reform.

To the delight of the Woman's Christian Temperance Union, Lucy Webb Hayes carried out her husband's orders to banish wines and liquors from the White House.

Elected by a heavy majority, Hayes entered Congress in December 1865, troubled by the "Rebel influences ... ruling the White House." Between 1867 and 1876 he served three terms as Governor of Ohio.

Although a galaxy of famous Republican speakers, and even Mark Twain, stumped for Hayes, he expected the Democrats to win. When the first returns seemed to confirm this, Hayes went to bed, believing he had lost.

But in New York, Republican National Chairman Zachariah Chandler, aware of a loophole, wired leaders to stand firm: Hayes has 185 votes and is elected.

The popular vote apparently was 4,300,000 for Tilden to 4,036,000 for Hayes. Hayes's election depended upon contested electoral votes in Louisiana, South Carolina, and Florida. If all the disputed electoral votes went to Hayes, he would win; a single one would elect Tilden.

Months of uncertainty followed. In January 1877 Congress established an Electoral Commission to decide the dispute. The commission, made up of eight Republicans and seven Democrats, determined all the contests in favor of Hayes by eight to seven. The final electoral vote: 185 to 184.

Northern Republicans had been promising southern Democrats at least one Cabinet post, Federal patronage, subsidies for internal improvements, and withdrawal of troops from Louisiana and South Carolina.

Hayes insisted that his appointments must be made on merit, not political considerations. For his Cabinet he chose men of high caliber. But, this outraged many Republicans because one member was an ex-Confederate and another had bolted the party as a Liberal Republican in 1872.

Hayes pledged protection of the rights of Negroes in the South, but at the same time advocated the restoration of "wise, honest, and peaceful local self-government." This meant the withdrawal of troops. Hayes hoped such conciliatory policies would lead to the building of a "new Republican party" in the South, to which white businessmen and conservatives would rally.

Many of the leaders of the new South did indeed favor Republican economic policies and approved of Hayes's financial conservatism, but they faced annihilation at the polls if they were to join the party of Reconstruction. Hayes and his Republican successors were persistent in their efforts but could not win over the "solid South."

Hayes had announced in advance that he would serve only one term, and retired to Spiegel Grove, his home in Fremont, Ohio, in 1881. He died in 1893. Read more on Wikipedia [1]

When the Civil War began, Hayes left a successful political career to join the Union Army. Wounded five times, most seriously at the Battle of South Mountain, he earned a reputation for bravery in combat and was promoted to the rank of major general. He fought in the Civil War, was wounded in action, and rose to the rank of brevet major general. While he was still in the Army, Cincinnati Republicans ran him for the House of Representatives. He accepted the nomination, but would not campaign, explaining, "an officer fit for duty who at this crisis would abandon his post to electioneer... ought to be scalped."

Rutherford Birchard Hayes was born in Delaware, Ohio, on October 4, 1822, the son of Rutherford Hayes and Sophia Birchard. Hayes's father, a Vermont storekeeper, took the family to Ohio in 1817 but died ten weeks before his son's birth. Sophia took charge of the family, bringing up Hayes and his sister, Fanny, the only two of her four children to survive to adulthood. She never remarried. Sophia's younger brother, Sardis Birchard, lived with the family for a time. Always close to Hayes, Sardis Birchard became a father figure to him, contributing to his early education.

Hayes moved to Cincinnati in 1850, and opened a law office with John W. Herron, a lawyer from Chillicothe. Later, Herron joined a more established firm and Hayes formed a new partnership with William K. Rogers and Richard M. Corwine. Hayes found business better in Cincinnati, and enjoyed the social attractions of the larger city, joining the Cincinnati Literary Society and the Odd Fellows Club. He also attended the Episcopal Church in Cincinnati but did not become a member. Hayes courted his future wife, Lucy Webb, during his time there. His mother had encouraged him to get to know Lucy years earlier, but Hayes had believed she was too young and focused his attention on other women. Four years later, Hayes began to spend more time with Lucy. They became engaged in 1851 and married on December 30, 1852, at the house of Lucy's mother. Over the next five years, Lucy gave birth to three sons: Birchard Austin (1853), Webb Cook (1856), and Rutherford Platt (1858). Lucy, a Methodist, teetotaler, and abolitionist, influenced her husband's views on those issues, although he never formally joined her church.

Through both his father and mother, Hayes was of New England colonial ancestry. His earliest American ancestor emigrated to Connecticut from Scotland in 1625.

Hayes's great-grandfather, Ezekiel Hayes, was a Militia Captain in Connecticut in the American Revolutionary War.

But Ezekiel's son (Hayes's grandfather, also named Rutherford) left his New Haven home during the war for the relative peace of Vermont. His mother's ancestors arrived in Vermont at a similar time, and most of his close relatives outside Ohio continued to live there. John Noyes, an uncle by marriage, had been his father's business partner in Vermont and was later elected to Congress. His first cousin, Mary Jane Noyes Mead, was the mother of sculptor Larkin Goldsmith Mead and architect William Rutherford Mead. John Humphrey Noyes, the founder of the Oneida Community, was also a first cousin.

Sponsored Search by Ancestry.com
DNA Connections
It may be possible to confirm family relationships with Rutherford by comparing test results with other carriers of his Y-chromosome or his mother's mitochondrial DNA. However, there are no known yDNA or mtDNA test-takers in his direct paternal or maternal line. It is likely that these autosomal DNA test-takers will share some percentage of DNA with Rutherford: 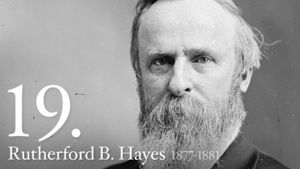 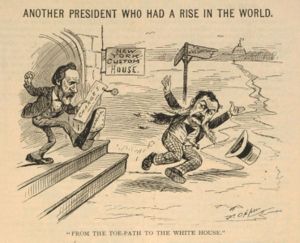 Robin Lee
Please go ahead and add them to his profile
posted Apr 10, 2020 by Robin Lee

Maggie N.
Hi ~ Can you add me the the trusted list ?

p.s. If you would like a US Presidents Project badge on your profile, let me know !

Maggie N.
Hi ~ Can you add me the the trusted list ?

p.s. If you would like a US Presidents Project badge on your profile, let me know !