The family tradition [This is the story as told for the most part by Isaac Hazen, son of Nathaniel, to Aaron L. Hazen about 1857} is that Nathaniel Hazen, soon after his marriage, joined the other Connecticut colonists in the Wyoming settlement on the Susquehanna River, but was driven out by the Indians at the time of the massacre in 1778. He, together with two or three brothers of his father, returned to New Jersey. [The records of Sussex Co., N. J., show that he was named an executor of the estate of his brother-in-law James Bell in 1778 and that "Nathaniel Hazen late of Newton, Sussex Co." sold land in Newton in 1793.] He is said to have served in the Continental Army during the Revolutionary War, and at its close to have moved with his brothers Joseph and Samuel to Fort Pitt (now Pittsburgh, Pa.). Not satisfied with Fort Pitt, they located in Washington County on Chartiers Creek in the Monongahela valley. They were veryl poor, having lost all when driven from the Wyoming valley, and here in the west, without convenient markets, their life was full of hardships. They took to making their grain into high wines, which they transported on pack saddles to Philadelphia, where they traded it for necessaries. Then Congress passed the Act levying an excise tax on high wines payable in coin, but the settlers had no coin and considered the tax unjust. In the ensuing Whiskey Rebellion, the Hazens were among the insurgents and at its close, rather than ask pardon for wrong which they did not admit they committed, the family in council decided to seek refuge in the wilderness. They went north of the Ohio River and opened up the tract where North Sewickley, Beaver Co., is now located. Nathaniel Hazen's farm was still in the possession of his grandson Smith McDaniel Hazen in the 1850;s.

On 28 Jan. 1797 Charles Morgan of Allegheny Co., Pa., for 91 pounds 10 s. conveyed to Nathaniel Hazen of Allegheny Co. 182 acres 143 perches called "Harcourt," [also read "Mancourt"], situated on the waters of Montours Run in Allegheny Co. [Allegheny Co. Deeds, 18:463.]
On 9 Sept. 1807 Benjamin Chew, Jr., conveyed to Nathaniel Hazen of Beaver Co., Pa., 200 acres, part of a tract called "Hatfield," situated on the Conequenessing Creek. [Beaver Co. Deeds, B:83.]
In Jan. 1821 Nathaniel Hazen and wife Mary of Beaver Co. for $1000 conveyed to Samuel Hazen land in North Sewickley township, Beaver Co., Conequenessing Creek, containing 115 acres, being part of Hazen's Delight which contained 393 acres 32 perches, of which 208 acres 50 perches were conveyed by Isaac Hazen to Nathaniel Hazen on 24 Mar. 1806. Witnesses: Stephen Rlunyan, Johannah Runyan. [Beaver Co. Deeds, H:182.]
Wikll of Nathaniel Hazen, dated 13 Oct. 1830, proved 6 June 1836, farmer of North Sewickley township, Beaver Co., Pa., left to his wife Mary the house where he resided and certain sums contained in an article between him and his son Samuel; to son James $10 and his blacksmith's tools which he already had; to son John $10 and to John's son John $5; to son Isaac $5; to son Nathaniel $1; to son Nathan $1; to son Samuel all the land he possessed, he to pay $10 an acre; to James, Lemuel, Amos, and Nathaniel Hazen [sons of his deceased son Jeremiah] $45 equally divided. John Merrick and son John Hazen to be executors. Witnesses: Abraham McDaniel, Sarah Eberhart, Elizabeth McDaniel, John Eberhart. [Beaver Co., Wills, B:130.]

ask our community of genealogists a question.
Sponsored Search by Ancestry.com
DNA Connections
It may be possible to confirm family relationships with Nathaniel by comparing test results with other carriers of his Y-chromosome or his mother's mitochondrial DNA. However, there are no known yDNA or mtDNA test-takers in his direct paternal or maternal line. It is likely that these autosomal DNA test-takers will share some percentage of DNA with Nathaniel: 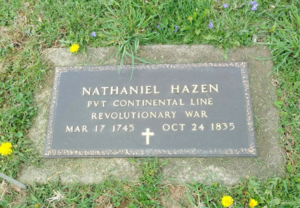 Leave a message for others who see this profile.
There are no comments yet.
Login to post a comment.
Kathy (Foote) Durham
What a great profile page! Thanks so much for including the disputed claim of Connecticut settlers in the Wyoming Valley of Pennsylvania, plus the Whiskey Rebellion story! Helps make sense of the different birth places for the children. Great background on how they ended up in North Sewickley after the Revolutionary war was over. More on the Fort Wyoming/Fort Durkee disputes and how the Iroquois were brought in by the British here: http://explorepahistory.com/hmarker.php?markerId=1-A-178
posted Oct 17, 2018 by Kathy (Foote) Durham

This family has orphans, children of Nathaniel, ready to merge. Thank you.