Theophilus Berrian Heath was born some time in March 2, 1846 in Burke County, Georgia. He is listed as four years old in the 1850 census, living with his mother, Sarah A. Heath, and siblings:

During the American Civil War, Theophilus fought for the Confederacy, serving in the state of Georgia.[4] Theophilus was a private in Georgia's 27th Battalion, Company A, Infantry.[5]

Cynthia Arelia Steele grew up on a farm in Atchison County, Missouri. Theophilus met Cynthia, here, while working on Robert Ely's farm, nearby, most likely at church, and on December 24, the day before Christmas, Theophilus and Cynthia were married. After their marriage they worked on a farm near the present site of Tarkio. Most likely, Theophilus worked on one of Mr. Rankin's farms, as Mr. Rankin owned most of the land around Tarkio at the time.[6]

Theophilus and Cynthia had four children while living in Tarkio:[7]

Theophilus and Aurelia followed their son, John James Heath to Stafford, Kansas in 1918. Living there for 8 years.

"Brother Heath was a farmer all his life and a great lover of flowers, as seen in the fine displays in the Stafford city park, which has been under his special care the last few years. Brother Heath was a Methodist of the old order. He was converted in 1883 and joined the M.E. church in 1884. A faithful and most regular attendant at the means of grace." Theophilus' Obituary; Written by the Stafford Newspaper and published on 12 Aug 1926.

Theophilus lived to a ripe old age of 80 years, dying on Wednesday evening on August 4, 1926. [Stafford Obituary]. Theophilus is buried in an unmarked grave at the Stafford Cemetery in Stafford, Kansas. Rest in peace Grandpa Theo!

Is Theophilus your ancestor? Please don't go away!

ask our community of genealogists a question.
Sponsored Search by Ancestry.com
DNA Connections
It may be possible to confirm family relationships with Theophilus by comparing test results with other carriers of his Y-chromosome or his mother's mitochondrial DNA. However, there are no known yDNA or mtDNA test-takers in his direct paternal or maternal line. It is likely that these autosomal DNA test-takers will share some percentage (beta) of DNA with Theophilus: 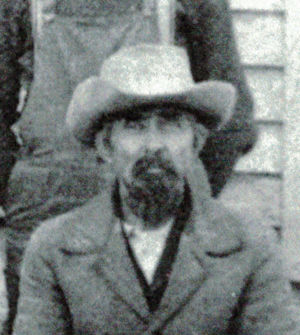 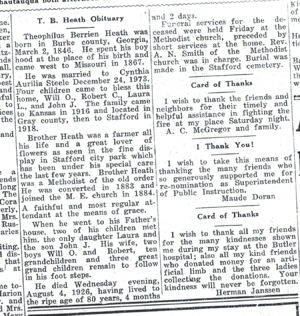 Theophilus and His Family 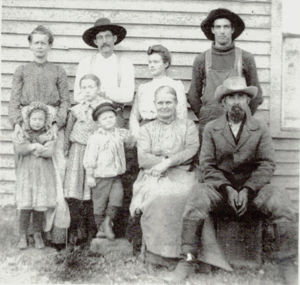 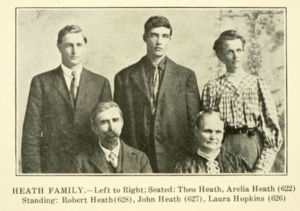 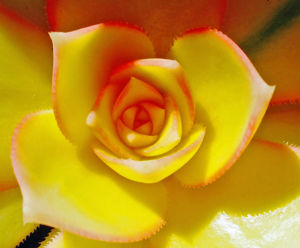