Donald was a Roman Catholic Priest

The Reverend Father Donald Joseph Hébert was born on 8 April 1942[1] in Lafayette Parish, Louisiana, United States. He was ordained in 1968.

It seems impossible to imagine trying to do genealogy in Louisiana without using something that he wrote. His first work was done in 1974 and his work on Acadians in southeast Texas was his 96th work.

Perhaps his best known work is the series, Southwest Louisiana Records, a set of over 47 volumes which contains abstracts of church and courthouse vital records in the Acadiana region of Louisiana from 1750 through 1915. The period of 1750-1900 was also published on a CD.[2]

Rev. Hebert died unexpectedly at his residence on 22 February 2000, and was entombed three days later at Assumption Cemetery, Mire, Louisiana.[1] He was 57 years old.

Father Hebert attended Immaculata Seminary in Lafayette, St. John Seminary in Little Rock, Ark., and graduated from Notre Dame in New Orleans in 1968. He was ordained June 1, 1968, in Lafayette.

He was named diocesan consultor in 1977, and in 1987, was on the diocesan school board for two terms.

Survivors include one sister, Barbara Hebert of New Orleans.

Visitation hours will be observed at Assumption Church from 8 a.m. today, with rosaries at 4 p.m. and 7 p.m., until service time Friday.

Gossen Funeral Home of Rayne is in charge of the arrangements.[3][1]

ask our community of genealogists a question.
Sponsored Search by Ancestry.com
DNA Connections
It may be possible to confirm family relationships with Donald by comparing test results with other carriers of his ancestors' Y-chromosome or mitochondrial DNA. However, there are no known yDNA or mtDNA test-takers in his direct paternal or maternal line. It is likely that these autosomal DNA test-takers will share some percentage of DNA with Donald: 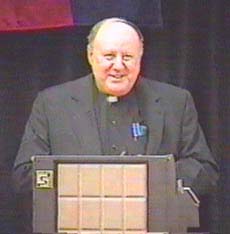 Leave a message for others who see this profile.
There are no comments yet.
Login to post a comment.
[Living Hollier]
http://www.acadian-cajun.com/hebpubl.htm#top
posted May 04, 2020 by [Living Hollier]