Antoine Hebert
Born about 1621 in France

NOTICE: this profile is protected by the Acadian Project because of frequent duplication, variant name spelling, attempts to add unsourced parents or is an historically important person, in the Top 100 highly viewed Acadian profiles. Please contact the Acadian Project before making any substantive changes. Thanks for helping make WikiTree the best site for accurate information.

Parentage. There is a debate about the parents of the Hébert brothers.[1] According to Godbout, the Hébert brothers may have been the children of Jacques Hébert and Marie Juneau.[2][3] The evidence supporting this claim is a link between: a) the presence of a Jacques Hébert in Acadia 30 years before the presence of the brothers Etienne and Antoine; and b) the April 15 1688 marriage contract at Quebec (Notary Lecompte; witness Louis Hebert's daughter Marie-Guillemette Hébert) between Francoise Chevalier and a Jacques Hébert from Le Haye in the Touraine parish of Balsesne, who was the son of Jacques and Marie Juneau. Stephen White argues that the connection is tenuous.[3] The name of the Jacques in the aforementioned contract had a surname Habert. Moreover, the presence of the witness Marie-Guillemette Hébert was likely due to the fact that Françoise Chevalier was her servant.

Location of Birth. Stephen White remains silent presumably due to the lack of birth records.[3] In contrast, Massignon [4] argues that a number of famillial alliances that existed among the first Acadian settlers PRIOR to their arrival from France points to a common French origin. She believes they lived in the Acadian Governor d'Aulnay's seigneury in France near Loudun (comprising of the villages of Angliers, Aulnay, Martaizé and La Chausée). In the case of the Hébert family, it was allied with the Gaudet through Antoine's marriage to Marie. Marie's sister Francoise was also allied with the LeBLanc family through her marriage to Daniel. Evidence of their marriages in France is found in the Belle-Isle-en-Mer declarations in 1767. Moreover, a certain Jean Gaudet, was censistaire in 1634 on land at Martaizé (Vienne) in the Seigneurie owned by the mother of Acadian governor Charles d'Aulnay. However, Massignon's research failed to find any relevant baptismal or marriage records.

Arrival in Acadia. There is no evidence supporting the couple's arrival in Acadia. It was certainly before 1671, as the family is listed there. Therefore it is not clear how the historical events in Acadia, provided in the timeline below, may have affected Antoine.

The Acadian Hébert family stems from two brothers. Antoine Hébert (brother of Etienne) was born around 1621[3] likely in France.[5] The brothers are often believed to be the sons of Jacques Hébert and Marie Juneau, but this is most likely false.[1]

Antoine's brother Etienne married around the same time (1650). It is not clear when Antoine arrived in Acadia.

At the time of the first Acadian Census in 1671[6], the family was living in Port-Royal, Acadia (today Annapolis Royal, Nova Scotia, Canada). Fifty year old Antoine and 58 year old Geneviève were living with their four children. Antoine was a cooper. Six arpents [7] of their land (in two places) was cultivated and they had 15 cattle and 18 sheep. It is not clear where their homestead was situated, although their nephews' farms were on the south bank of the Dauphin (Annapolis River) east of the fort.[3][8]

Antoine probably died by 1693, since he does not appear in that census.

1667-70 Treaty of Breda cedes Acadia to the French; settlement resumes[12]

This is language issue with and without

The nosorigines family tree has him married to Genevieve Lefranc.

Sponsored Search by Ancestry.com
DNA Connections
It may be possible to confirm family relationships with Antoine by comparing test results with other carriers of his Y-chromosome or his mother's mitochondrial DNA. Y-chromosome DNA test-takers in his direct paternal line on WikiTree: It is likely that these autosomal DNA test-takers will share some percentage (beta) of DNA with Antoine: 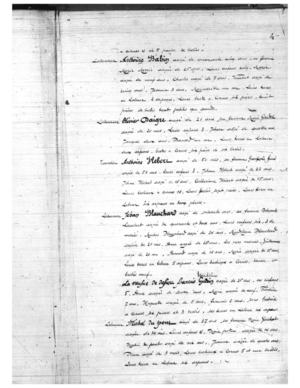 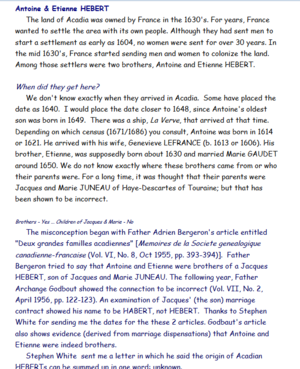 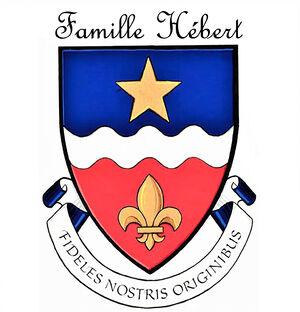 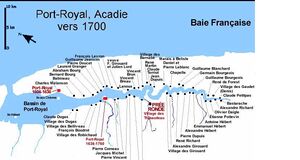 Same birthdate (1621 is mentioned in bio) Same spouse, same marriage information The three children of Hebert-54 are listed in the other biography Same death information.

Jacqueline Girouard
Isaac Taylor: to your question. I'm not sure why you are asking that but, I see nothing in the bio to indicate that he had another name. You may follow the links in the bio to see if any of the cited sources indicate that. Please let us know what you find out! Thanks for your interest.
posted Jun 01, 2019 by Jacqueline Girouard
Isaac Taylor
Was his middle name Jacques?
posted May 28, 2019 by Isaac Taylor
André Vachon
Hebert-2582 and Hebert-54 appear to represent the same person because: Hi Frank,

As mentioned earlier, you should think of merging them. Take a good look before doing it, just in case...

Nina Pyne
This is amazing research! We should all use this as an example of how to include contentious issues as discussion points.
posted Aug 13, 2014 by Nina Pyne

Annette Cormier
I am removing the link to Jacques Hebert and Marie Juneau. This contentious link is discussed in the biography.
posted Jul 30, 2014 by Annette Cormier