Language: en | de | nl
New to DNA? See DNA Help > How to Get Started with DNA

Here's what "Confirmed with DNA" means on WikiTree.

When you're ready to do confirmations, see DNA Confirmation. 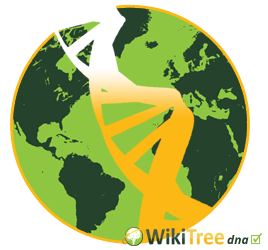 "Confirmed with DNA" is a relationship status level that indicates a parent-child relationship has been supported by DNA testing in addition to traditional genealogical research. Using it means this icon will appear by fathers and mothers on profiles and most tree views:

If there isn't a proper source citation the "Confirmed with DNA" relationship status should be changed (by you or another member) to "Confident".

Confirmation is not absolute proof. Major caveats include:

"Confirmed with DNA" cannot be used if the genealogy is incomplete. If a DNA testing company estimates that you're a close match with someone else, you can be fairly confident that you and your match share a common ancestor in a genealogical time frame. However, you may not know the identity of the common ancestor, or you may not be confident about each link in the chain of parent-child relationships back to the common ancestor.

This is very common. It's likely to be the case with most of your matches.

"Confirmed with DNA" should only be selected after using one of the methods described on the DNA Confirmation page.

Genealogy Supported by DNA but not Confirmed with DNA

If a relationship is supported with DNA evidence but cannot be considered confirmed using one of the approved methods use the Confident status instead of Confirmed with DNA.

It's recommended that you still follow the basic source citation format described on the DNA Confirmation page when using a DNA test match as a source on a profile, even if the relationship is not confirmed. You may also wish to use a === DNA === subsection under the == Biography == with a full explanation.

The Relationship Status can be changed to Confirmed with DNA when more evidence is gathered through additional matches or if the current evidence is able to be more carefully analyzed.