New to DNA? See DNA Help > How to Get Started with DNA

See Relationship Finder for basic information about the tool. 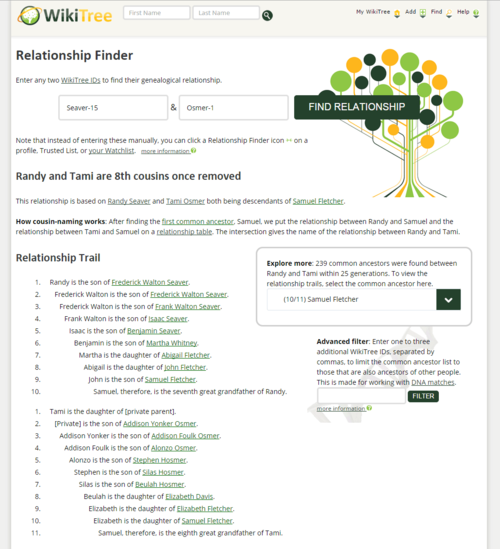 WikiTree's Relationship Finder is a "cousin calculator," i.e. it names relationships such as "fifth cousin twice removed." For relationship naming you only need to know the first common ancestor shared by the two people.

If the Relationship Finder finds more than one common ancestor you can explore them all using the pull-down menu labeled "explore more".

The Relationship Finder will show you common ancestors as far back as 30 generations. This could be useful when analyzing relationships with Y-chromosome and mitochondrial DNA testing.

However, no more than 10 or 15 generations, at most, are likely to be relevant for autosomal DNA tests. If you have a relationship with someone that's more than 15 generations back, it's almost certainly not the relationship that has given you a significant shared segment of autosomal DNA. [1] If you are identified as a match with another person and yet the only common ancestor you're finding with that person is older than 10 generations back, it could very well be because other more recent relationships haven't been identified on WikiTree yet.

Encourage your matches to add their family

The greatest limitation of the Relationship Finder, of course, is that it's only as good as the relationships on WikiTree. WikiTree will never be perfectly complete and correct, but it gets better every day through member contributions.

Encourage your matches to help build our shared tree. See DNA Matches for ways WikiTree makes it easier to work with matches.

Advanced Filter: Limit to Ancestors Shared by Other Matches

An input box will appear below the selection box for browsing your multiple common ancestors. It's labeled "advanced filter." You can enter one, two, or three additional WikiTree IDs.

Limit to paternal or maternal side

You can also restart the Relationship Finder using your father's or mother's ID instead of your own.

This filter is designed to facilitate "triangulation."

If you share a segment of autosomal DNA with two or more other people who also match each other on that segment, that's a big clue in discovering which ancestor it came from.

For example, the Relationship Finder for Lianne Lavoie (Lavoie-74) and Roland Arsenault (Arsenault-64) finds 42 common ancestors. If a third member, Annette Cormier (Cormier-577), also matches them on the same segment of DNA, they can filter by Cormer-577 and it limits it to 28 common ancestors. If we add a fourth or fifth person we might isolate exactly where the DNA came from.

Experiment with the order in which you add additional IDs

If you're limiting the display to ancestors who are also shared by a third, fourth, or fifth person, you may need to rearrange and experiment with the order in which you enter them.

The two you start with should be the most distantly-related. For example, if you know that one of your matches is a third cousin and the other is a fourth cousin, start with you and your fourth cousin. Then limit the display by entering your third cousin.

When entering a third, fourth or fifth person, it's best to enter them one at a time. That is, instead of entering all three IDs in the filter, add the third, then the fourth, then the fifth. If you enter them all at once you will only see ancestors that are shared by all five people. If only three or four of them have common ancestors they won't be found.

You can play with the order as much as you want. Just be patient while the connections load. It may take a minute or two, depending on the number of common ancestors.