Events 1
Clarence "Ed" Hemingway was the patriarch of the Oak Park family that spent summers on the north shore of Walloon Lake at their beloved cottage, Windemere.

Ed was born on September 4, 1871 in Oak Park and went on to graduate from Rush Medical College as a general practitioner. He attended New York Laying-In Hospital in Obstetrics in 1908 (and later invented the Spinal Forceps).

On October 1,1896, he married Grace Hall, and they had six children: Marcelline, Ernest, Ursula, Madelaine (Sunny), Carol and Leicester.

The young Hemingway family made their way to northern Michigan for the first time in 1898 and instantly fell in love with the natural surroundings of what was then known as Tolcott (now Walloon Lake). Determined to find a suitable place to build their summer cottage, Ed and Grace set out by boat to explore the shoreline and ultimately found (and subsequently purchased) four lots that was part of Bacon’s Farm on the north shore. They eventually spent $400 to have a single-story 20’ x 40’ frame structure, with a gabled roof and white clapboard siding, constructed on the site. The simple cottage was completed by September 1899 — a full year before Walloon Lake was officially designated as the area’s forever name.

Ed passed his love of nature, hunting, fishing and boating along to not only his later well-known son, Ernest, but to all of his children. They were always outside enjoying the woods and waters around Walloon Lake near Windemere - which is still owned by descendants of the family today. [5]

Events 2
When famed son Ernest was born his father, "Doc Ed," a country doctor, blew a horn on his front porch to announce that his wife had given birth to a son.

Grace Hall, Clarence's wife was an aspiring opera singer who taught music when her career did not pan out. She was very much a product of the strict Protestant Oak Park area where she lived. Son Ernest Hemingway later described the place he lived as having, "wide lawns and narrow minds."

Ernest's mother wanted him to follow her love of music, but he was drawn to his father's lifestyle. He preferred the outdoors including the "up north" to their cottage in Michigan where they would go hunting, fishing and camping in the woods and lakes of Northern Michigan. The family summer home, called Windemere, was near Petoskey on Walloon Lake. These early years would shape Ernest's future and inspire much of his writing. [6]

See the changes page for the details of edits.

Items at ancestry.com, a subscription site

ask our community of genealogists a question.
Sponsored Search by Ancestry.com
DNA Connections
It may be possible to confirm family relationships with Clarence by comparing test results with other carriers of his Y-chromosome or his mother's mitochondrial DNA. However, there are no known yDNA or mtDNA test-takers in his direct paternal or maternal line. It is likely that these autosomal DNA test-takers will share some percentage of DNA with Clarence: 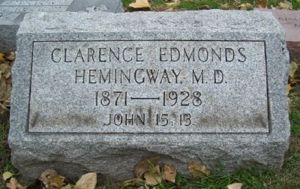 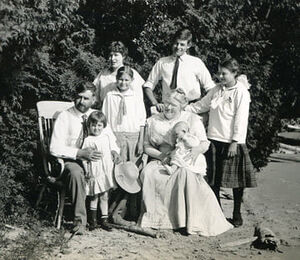 Ernest Hemingway when he married Hadley, with his family 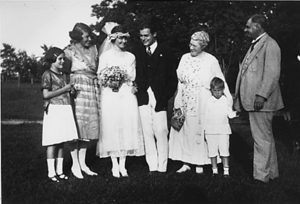 Leave a message for others who see this profile.
There are no comments yet.
Login to post a comment.
Sally x
merge new profile Hemmingway-35 into existing profile Hemingway-2 because the family name is spelled with only 1 letter m - this is true for about 8 Hemmingway profiles that are duplicates of existing Hemingway profiles
posted Jun 08, 2014 by Sally x
Sally x
Links to ancestry.com do not display info or photos since I am not a ancestry subscriber. Can images be loaded onto wiki-tree profile ?
posted May 18, 2014 by Sally x