David was the son of John Peter Harrold, Jr and his first wife, Elizabeth Muehleisen Milliron
Maybe named for his uncle, David Harrold.
Elizabeth Silvius may have had John Peter's last 2-3 boys (or maybe just David, or maybe none of them):
Samuel Harrold, b 1815
Peter R. Harrolle, b 1818
David Heral, b abt 1820-25

David married MARY ANN LEATHERS.
On the IL Marriage Index they are listed as: "David Harrole & Mary Ann Leathers, Jan 9, 1845, Richland County."
From the Richland County Marriage Records, filed at Olney: "I do hereby certify that on the Ninth day of January in the year of our Lord 1845, I joined in matrimony Mr. David Hearld and Miss Mary Ann Leathers in usual form according to Law given under my hand and seal date above written. (signed) John Dollahan, J.P."
But his marriage license says David Heral.
Since David could not read or write the spelling of his name varied greatly.

For some reason, in Oct, 1850 he and Mary Ann were living with Thomas & Elizabeth Bird. (Perhaps he hadn't yet built a house on his new property.) Don’t know if they were related. He did have an aunt (or sister) named Elizabeth, but she married George Freeke.

David had been married 16 years and had 4 children when he joined the Union Army Dec 24, 1861 and was in Co F, 60th Ill. Vol. Inf. as "David Herald".
He re-enlisted in Feb 1864 and was discharged at the end of the War, July 31, 1865 in Louisville, Ky. He enlisted as a resident of Claremont, Richland Co., Ill. His records describe him as 6 ft., light complexion, grey eyes, light hair. "He contracted disease of heart & liver from exposure to cold rain which settled in his system and disabled him from soldier's duty...from which he never recovered."[4]
His group was in the siege of Corinth May 1862, in the siege of Nashville Sept-Nov 1862, and in the battle of Murfreesboro Jan 5, 1863. He re-enlisted Feb 22, 1864. He named a son William Sherman after the famous Civil War Union general.
There was a John Herald & a John W. Herald also from Claremont who were in the 60th Ill. Infantry with David. This was probably David's brother and his cousin.

Their daughter Emma had married a man from Wabash County in 1878 and moved there to Lancaster.

In 1881 David was still living in Wabash Co. in Mier, Ill. Also living nearby was Frank & Emeline Hinderliter (his daughter Sarah Emma).

David did not drink or smoke, but suffered from trouble with his lungs, heart trouble, rheumatism & diarrhea, all which he contracted during the Civil War. "He was very sick from July 1890 to Oct 1891, not able to make a living from manual labor" (quote from military pension record). He also could not read or write.

He moved to Colorado (perhaps because of his sickness?) with his married son Will sometime around 1893. (Will married in Omaha, Neb in Aug 1892.) The railroad had come through Seibert, Kit Carson County, Colorado in 1888-89, so it's likely they traveled there on the train.

Family accounts say that Mary Ann was a small woman. She lived for 9-10 years with son, Will in Colorado after David died. Will's 4-year-old son died in Siebert Colo. in Mar 1903. After that, they all moved to Howell Co, Missouri, where they were fairly near her daughter, Mary E. (Heral) VonAllmen in Rover (Oregon Co.). 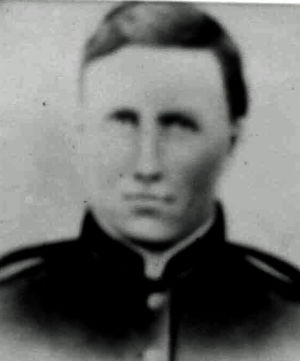 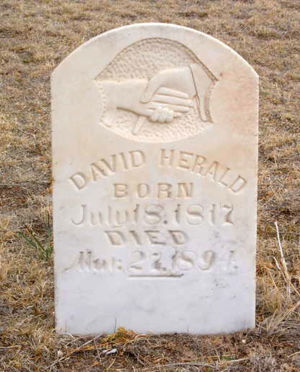 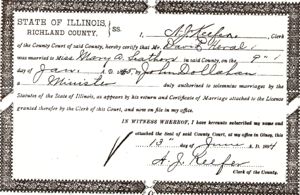