George Herbert was a one of ten children of Richard Herbert (died 1596) and his wife Magdalen née Newport, the daughter of Sir Richard Newport (1511–70). He was educated at Westminster School and Trinity College, Cambridge. After graduating he became a Fellow of his College and University Reader in Rhetoric, and went on to be appointed Cambridge University's Public Orator. In 1624 and 1625 he represented Montgomeryshire in the House of Commons. All this might have been the start of a promising political career, but George Herbert abjured that to become Rector of Fugglestone St Peter with Bemerton, Wiltshire, England. He died of consumption in 1633.

George Herbert is best known as one of the metaphysical poets. He used simple language to convey his experience and view of Christian life, seeing everyday objects as gateways to insights into the spiritual world. Many of his poems involve formal experiments. In one poem - Easter Wings - the shape of the lines of the two verses has the appearance of a bird's wings.

His poetry - collected in The Temple in the year of his death - is still widely read, and several of his poems have been set to music as hymns.

Besides his poetry, he also wrote The Country Parson, also entitled A Priest to the Temple (published posthumously in 1652), which was advice to priests in rural parishes, including about the use of things from everyday country life in sermons. A collection he made of aphorisms was published in 1640. 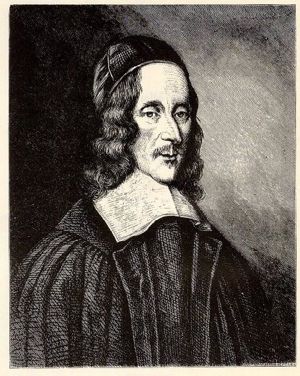 George is 19 degrees from Jaki Erdoes, 14 degrees from Wallis Windsor and 7 degrees from Henry VIII of England on our single family tree. Login to find your connection.