Maurice was born in Homer, Nebraska in 1900. He was the son of Louis Herman and Cecelia Londrosh.

Operated the Mainliner, in a business described as "Tap." (DC)

Maurice was a veteran of both World Wars. (DC)

He passed away on 26 Nov 1944 at St. Vincent Hospital, two days after being critically injured in an automobile accident on a public highway within the city limits of Sioux City, Iowa. He "died from delayed shock following severe trauma and extensive lacerations extending into the large and small bowel. Exposure of the eviscerated bowel to mud, sand, coal and physical trauma." (DC) He was buried in Calvary Cemetery, Sioux City, Woodbury County, Iowa, USA.

Is Maurice your ancestor? Please don't go away!

ask our community of genealogists a question.
Sponsored Search by Ancestry.com
DNA Connections
It may be possible to confirm family relationships with Maurice by comparing test results with other carriers of his ancestors' Y-chromosome or mitochondrial DNA. However, there are no known yDNA or mtDNA test-takers in his direct paternal or maternal line. It is likely that these autosomal DNA test-takers will share some percentage of DNA with Maurice: 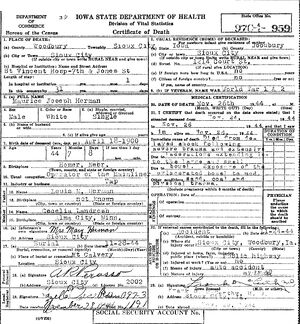