Elizabeth was born in 1894. She is the daughter of Herbert Herrick and Fannie Foote.

The recent effort of admirers of Robert Browning, poet, to acquire his love letters permanently for Southern California exhibition, has brought to light a hitherto unpublished letter of Mark Twain, humorist, telling not only of his attachment for the poet of which many of his admirers have remained unaware but also of his abilities as an Interpreter of the poet.

Written more than forty rears ago to Cornelia Welsh Foote of Cincinnati, the letter was brought to light by Elizabeth Herrick Steake of Hollywood. The publicity attendant at the time to Browning recalled the letter to her mind and she has presented it for publication.

This is the letter which Mark Twain wrote to Mrs. Foote from Hartford on December 2. 1887. It was penned on three sheets of thin tablet paper folded twice to fit into a plain white envelope:

"Well, people and things do swap, places in most unexpected ways in this world. Twenty years ago I was a platform humorist and you a singer of plaintive Scotch ballads that were full of heartbreak and tears. And now we have changed places. You are platform humorist (among other things) and I am reader to a Browning class!

"I can't imagine a completer reversal of roles than this. I hope you find your change as pleasant as. I do mine, and that you are as willing as I to let the thing remain as it is; for I wouldn't trade back for any money.

"Now. when you come to think of It, wasn't It a curious idea — I mean for a dozen ladies of (apparently) high intelligence to elect me their Browning reader? Of course, you think I declined at first, but I didn't. I'm not the declaring sort. I would take charge of the constellations if I were asked to do it. All you need in this life is ignorance and confidence, then success is sure.

"I've been Browning reader forty-two weeks now, and my class has never lost a member by desertion. What do you think of that, for a man In a business he wasn't brought up to?

"I wonder if — in one particular — your experience in your new vocation duplicates mine. For instance, I used to explain Mr. Browning — but the class won't stand that They say that my reading imparts clear comprehension, and that Is a good deal of a compliment, you know; but they say the poetry never gets obscure till I begin to explain it which is only frank, and that is the softest thing you can say about it. So I've stopped being expounder, and thrown my heft on the reading. Yes, and with, vast results. I don't wish to flatter anybody, but I will say this much; put me In the right condition and give me room according to my strength, and I can read Browning so Browning himself can understand it. It sounds like stretching, but it's the cold truth. Moral: Don't explain your author, read him right, and he explains himself.

"I wish you every possible success and shall be as glad as your own heart to hear that you have won It.

Mrs. Steake Is the granddaughter of the late Mrs. E. P. Galbraith, for many years one of Spokane's most prominent early club women. She founded the Cultus club in 1892.

Mrs. Steake’s mother was active in Spokane musical circles for many years, and her father, H. A. Herrick, was a New York newspaper man.

Mrs. Steake has written a number of Interesting books on travel, and her latest work, "Curious California Customs," has sold more than 115,000 copies. She writes under the name of Elizabeth Webb Herrick.

The volume is a handbook of Information for the traveler who seeks the unusual. Mrs. Steake is writing a similar book on Seattle, and looking about Spokane to see if she can weave Into a story the unusual and interesting events of her childhood here. Interesting to Spokane, too. is the fact that the cover design is done by Clarence Talbot of this city.

Mrs. Steake is also editor of California's "South Land Vacationist," a monthly Los Angeles publication. During a winter in New York she wrote a number of interesting reminiscences from her grandmother's letters to and from Mark Twain, a lifelong friend. Incidentally she sold a group of Mark Twain’s letters to Brentano's, New York publishers.

Mr. Steake was the law partner of the late Nell Bardsley during his residence in Spokane.

Last week Mrs. Steake was the house guest of Mrs. J. B. Fisken.

ask our community of genealogists a question.
Sponsored Search by Ancestry.com
DNA
No known carriers of Elizabeth's ancestors' DNA have taken a DNA test. 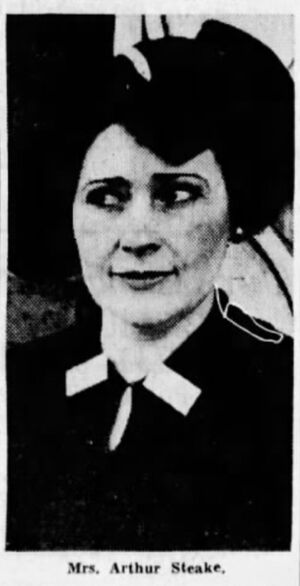