Born a granddaughter of Queen Victoria of the United Kingdom, she was given the name Alexandra Feodorovna upon being received into the Russian Orthodox Church, which canonized her as Saint Alexandra the Passion Bearer in 2000.

Alexandra was born on 6 June 1872 at the New Palace in Darmstadt as Her Grand Ducal Highness Princess Viktoria Alix Helena Luise Beatrice of Hesse and by Rhine, a Grand Duchy that was then part of the German Empire. She was the sixth child among the seven children of Grand Duke Louis IV of Hesse and by Rhine, and Princess Alice of the United Kingdom, the second daughter of Queen Victoria and Albert, the Prince Consort.

Alix and Nicholas (Romanov) were related to each other via several different lines of European royalty and nobility: the most notable was their shared great-grandmother Princess Wilhelmina of Baden, making them second cousins via this line; and King Wilhelm II of Prussia, who was simultaneously the great-great-grandfather of Alix and the great-great-great-grandfather of Nicholas, which in this line made them third cousins, once removed. Alexandra and Nicholas were wed in the Grand Church of the Winter Palace of St Petersburg on 26 November 1894, the birthday of Nicholas's mother, now Dowager Empress Marie Feodorovna.

The former tsar and tsaritsa and all of their family, including the gravely ill Alexei, along with several family servants, were executed by firing squad and bayonets in the basement of the Ipatiev House, where they had been imprisoned, early in the morning of 17 July 1918, by a detachment of Bolsheviks led by Yakov Yurovsky.

Sponsored Search by Ancestry.com
DNA Connections
It may be possible to confirm family relationships by comparing test results with Alexandra Feodorovna or other carriers of her mitochondrial DNA. Mitochondrial DNA test-takers in the direct maternal line:

Images: 1
Princess Alix Empress of all the Russias Image 1 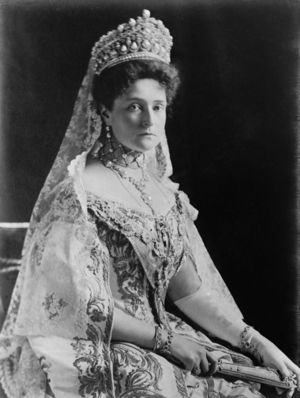 SJ Baty
Hi, can you add the Russia Project as co-PM for this profile? Thanks!

Jackie Stoddard
Hi Gerard , is there a profile for Isabel Graves?

our Paternal YDNA closest matches is Graves ! not Stoddard

Jackie Stoddard
can the autosomal not be done from the same DNA sample that the MtDNA was taken from ; this would help a lot of royal Stuart & Romanov etc descendants , while its still only $59 on FTDNA but only until end of 31st Dec (hopefully thats where it was tested?)
posted Dec 30, 2016 by Jackie Stoddard

Peter Roberts
Her autosomal DNA has not been tested.
posted Aug 07, 2016 by Peter Roberts

Jackie Stoddard
it would be very helpful if someone can find out if an autosomal DNA test has been done on Princess Alix , and if so load a gedmatch no. does anyone know of it? I,d like to compare our DNA for the Stuart line proof

Liz (Noland) Shifflett
Hi! I added the picture of her back as primary photo (so it shows in family trees & as thumbnail at upper left of profile). Feel free to remove it if you'd like (or let me know & I can "unset" it).

Peter Roberts
I have temporarily adopted this profile. If you are experienced with European royals and aristocrats then I welcome you being the profile manager.
posted Jul 31, 2014 by Peter Roberts
Anonymous Haun
Her Gedmatch number is not found. Is it possible for you to update the kit #, if so thank you!

Plus, thank you for everything that you do here on WikiTree!