Elisabeth Hessen-Darmstadt was a member of the aristocracy in Europe.

Grand Duchess Elisabeth of Russia (Russian: Елизавета Фëдоровна Романова, Yelizaveta Fyodorovna Romanova; canonized as Holy Martyr Yelizaveta Fyodorovna; 1 November 1864 – 18 July 1918) was a German princess of the House of Hesse-Darmstadt, and the wife of Grand Duke Sergei Alexandrovich of Russia, fifth son of Emperor Alexander II of Russia and Princess Marie of Hesse and the Rhine. She was also a maternal great-aunt of Prince Philip, Duke of Edinburgh, the consort of Elizabeth II.

Elisabeth's great-aunt, Empress Maria Alexandrovna of Russia, was a frequent visitor to Hesse. During these visits, she was usually accompanied by her youngest sons, Sergei and Paul. Sergei proposed to her for the second time, she accepted—much to the chagrin of her grandmother Queen Victoria. Sergei and Elisabeth married on 15 (3) June 1884, at the Chapel of the Winter Palace in St. Petersburg. She became Grand Duchess Yelizaveta Fyodorovna.

Elisabeth became famous in Russian society for her beauty and charitable works among the poor. After the Socialist Revolutionary Party's Combat Organization murdered her husband with a dynamite bomb in 1905, Elisabeth publicly forgave Sergei's murderer, Ivan Kalyayev.

In 1918 she was arrested and ultimately executed by the Bolsheviks. In 1981 Elisabeth was canonized by the Russian Orthodox Church Outside of Russia, and in 1992 by the Moscow Patriarchate.

ask our community of genealogists a question.
Sponsored Search by Ancestry.com
DNA Connections
It may be possible to confirm family relationships with Elisabeth by comparing test results with other carriers of her ancestors' mitochondrial DNA. Mitochondrial DNA test-takers in the direct maternal line:

Images: 1
Princess Elisabeth of Hesse and by Rhine 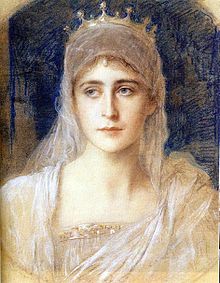