Heydrich is a high-ranking German SS and police official during the Nazi era, and a main architect of the Holocaust. He is chief of the Reich Main Security Office (including the Gestapo, Kripo, and SD). He is also Stellvertretender Reichsprotektor (Deputy/Acting Reich-Protector) of Bohemia and Moravia. Heydrich serves as president of the International Criminal Police Commission (ICPC; later known as Interpol) and chairs the January 1942 Wannsee Conference, which formalizes plans for the "Final Solution of the Jewish Question"—the deportation and genocide of all Jews in German-occupied Europe.

Is Reinhard your ancestor? Please don't go away!

ask our community of genealogists a question.
Sponsored Search by Ancestry.com
DNA
No known carriers of Reinhard's ancestors' DNA have taken a DNA test.

Images: 1
Heydrich as an SS-Gruppenführer in 1940 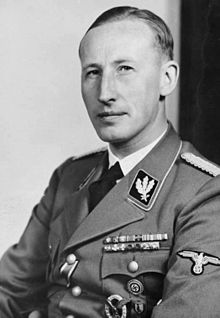