Ezra Stearns in his 1908 Genealogical and Family History of the State of New Hampshire, reports that Robert was baptized on March 13, 16[?12/]13 at Salisbury, England, and indeed the Parish registers of St. Edmund's Church (Salisbury), 1539-1973 is an entry for the son of John Hibbard, who was baptized in St. Edmund’s Parish, Salisbury, England, March 13, 1613.[1] Surname appears as Hibbert in the Salisbury parish register. [2]

Source(s) which include evidence that this is the identical Robert Hebert, immigrant to Salem and Beverly, and his mother's name are sought.[citation needed] The suggestion is from Anderson's GM that Bridget Unknown-219561 was either Robert's mother of that of his wife Joan.

Robert probably immigrated from England, but the date and ship's name are unknown. On May 3, 1646, "Robert Hibberd and wife Joan" were admitted to communion at the First Church of Salem.[3] We have evidence that Robert may have been at Salem years earlier. According to Annals of Salem, Vol II, he was there in "1639. Robert Hebard, salt maker."[4] Robert may have been working with John Winthrop, Jr. who had a salt works at Salem in the 1630s.

Joan's maiden name has been reported as Luff. However, this is unlikely. John Luff appears to have married (for the first time) sometime between 1637 and 1647 to Bridget [[Unknown-219561, as a widow. Joan and Robert Hibbard were married by 1641, when their first child was born. Therefore, Joan could not have been a daughter of John Luff. Anderson concludes that John Luff's wife, Bridgett, was the mother of either Robert Hibbard or of his wife, Joan. This does not provide Joan's maiden name. (See Research Notes for more)

The above are the only known children of Robert and Joan. Others include the following (without evidence).

Note: Some of the children's marriages differ between authors. Primary records will be essential in these cases: John, Joseph, Robert and possibly more.

Robert Hebert was a bricklayer[6] and a salt maker. Their home was "in the Beverley part of Salem on the south side of Colon Street, about halfway between Cabot and Heather streets."[6]

Wife's Maiden Name: Louis Effingham De Forest in Our colonial and continental ancestors: the ancestry of Mr. and Mrs. Louis William Dommerich, concluded that Joan, wife of Robert Hibbard/Hebert, was the daughter of John Luff. Anderson addressed this in his feature of John Luff and came to the conclusion that "... between 1637 and 1647, John Luff married Bridgett, a widow who was mother of either Robert Hebert or his wife Joan."[5] In 1637, John Luff's household contained only one person; if he had been married with a daughter, the number would have been at least three. Our first record that John Luff was married was 16 May 1647 when "Bridgett Loofe" was admitted to the Salem church.[5]

Perley in The History of Salem ... agrees that "Joan ____" was not a daughter of John Luff. He reports that Bridgett (Love) Luff lived in the Hebert household for a time, and she called "probably John's mother."[6] His conclusion may be based on the 24 June 1671 deposition in which Bridgett stated her age was 84 years. Anderson feels this "age may have been somewhat exaggerated."[5] Unfortunately Perley gives no clue about any evidence for Bridgett's maiden name as Love. 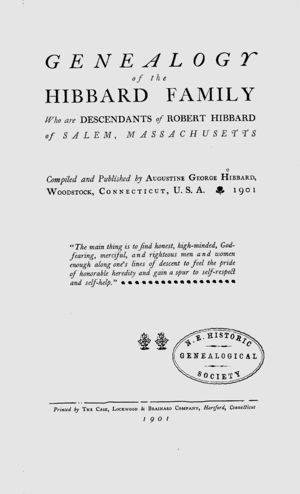 Genealogy of the Hibbard Family, pg. 11 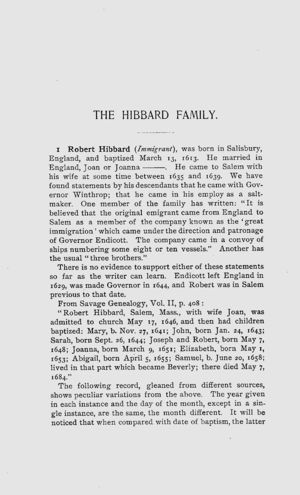 Genealogy of the Hibbard Family, pg. 12 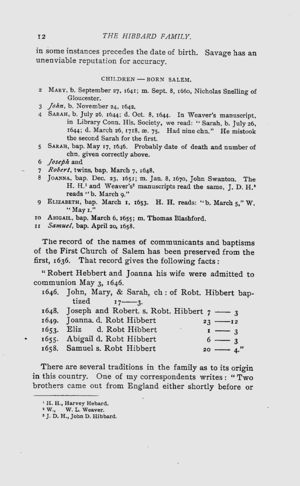 Genealogy of the Hibbard Family, pg. 13 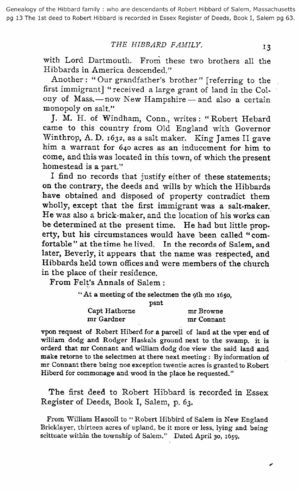 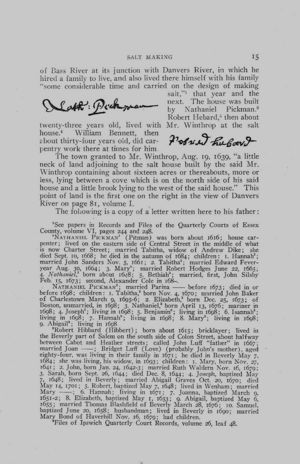 Leave a message for others who see this profile.
There are no comments yet.
Login to post a comment.
Marilyn Vanderville
I propose that John Luff IS Robert Hibbard's father-in-law. The argument against does not precluse John Luff from being Joan's father, just Bridget from being her mother. The John Luff that he is referring to may have been a brother to Joan or Bridget may have been a step-mother. I have uploaded a page from the Salem Town Records that refers to John Luff as Robert Hibbard's father.
posted Mar 11, 2020 by Marilyn Vanderville