He was born in Sackville as mentioned on his daughter's death certificate[2] and would have moved to Butternut Ridge in 1840 when his parents moved there. The community of Hicksville was named after their family.

Howard and Nancy had 3 children, Eldon Herman, Mary Etta and Howard. Several references have other children but they only had the 3.[3]

In 1891 Howard and Nancy also had in their household, Herman and Olive and their 4 children along with Howard Jr.

Doug Ayer had Howard as buried in Upper Greenhill Loyalist Cemetery but it is not in Find-a-Grave. I expect the stone went missing in the meantime. Death date comes from Doug's files.

Howard Hicks lived in Butternut Ridge which is in Westmorland County. It is immediately adjacent to Havelock which is in Kings County. The Census district is Salisbury so you often see any of the three names referring to the same location.

Is Howard your ancestor? Please don't go away!

ask our community of genealogists a question.
Sponsored Search by Ancestry.com
DNA Connections
It may be possible to confirm family relationships with Howard by comparing test results with other carriers of his Y-chromosome or his mother's mitochondrial DNA. However, there are no known yDNA or mtDNA test-takers in his direct paternal or maternal line. It is likely that these autosomal DNA test-takers will share some percentage of DNA with Howard: 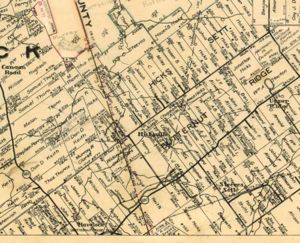