Mary was born on 13 Jan 1877 [1] to Marshall J and Frances Ann (Harris) Hightower, in Tomlinson, Scott Co Arkansas.[2] Her mother died when she was a girl, how young is unclear, her father remarrying just before she turned 10. She lived in the house with her step mother for only four years, because on 29 March 1891 she married English Walker Yates, [3] eleven months after his first wife died in a house fire. As the story goes, young Mary, from across the road, felt sorry for the two little girls who had lost their mother, began caring for them, and became their new mother at age 14.[4] Although the marriage record listed her age as 16, this is rather unlikely, as four different census records and her death certificate place her birth in early 1877.

The marriage lasted about 20 years. Lowell Yates, a grandson who stayed with Mary at times, recalled stories.[5] It was around 1911 when English Walker Yates abandoned Mary and their children, leaving in a horse-drawn wagon from which he operated a photography business or sold goods. Mary was in her early thirties then, still quite attractive, enterprising, and with a "razor tongue." The oldest son Atmer, large and strong for his age, started working in the Lehigh coal mines at age 15 to support the family. For a time in the 1920s Mary operated a restaurant out of an old railroad dining car, the classic "diner." In the small mining town there were rumors with innuendo that a man had helped her to set up the business.

Mary had nine children[6], with grandchildren from six of them. A two-year old son was lost in 1894, and a daughter Lois died at age 4 in 1909. Mary's first daughter, Myrtle, died in 1916 two weeks after her first childbirth. Mary raised the grandchild, James Belmont Dutton. Her youngest son Cecil died in a hunting accident in 1922. Mary died of stomach cancer in 1940 while living with her daughter Doyn Hooter in Giddings, Texas[1] and is buried near their permanent home in Shreveport.[7] 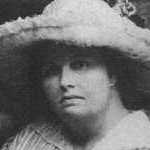 Kay (Johnson) Wilson
Please add a statement(s) to this profile explaining how DNA was used to confirm the parental relationships. Here are the instructions: https://www.wikitree.com/wiki/DNA_Confirmation
posted Aug 20, 2020 by Kay (Johnson) Wilson