Ogden Standard July 19, 1887 A Veteran Gone Editor Herald: -- At this late date I am desired to write an obituary of Father Higley, who died of dropsy in this precinct on the 16th ult., aged 85 years 5 months and 17 days. Myron S. Higley, son of Job Higley and Dorcus Eggleston, was born in Simsbury, Ct., December 29th, 1801. His father supposed to be dead, in his 12th year Myron, with a younger brother, was leased to an uncle, but not relishing the treatment they there received, left without warning after two years' service; wandered off some forty miles and were kindly taken in by a stranger with whom they lived some years, when they went to Gananoqui [sic] Canada, and engaged in the business of turning wooden bowls and making water buckets, which Myron exported in large quantities. He married Priscilla Ebberson, October 1885 [Note: Jun 1826 is correct date]; heard and embraced the Gospel just before the Patriot War and moved to New York State; presided over a branch of the church in Port Leyden two years; made his mother a visit and converted her to the truth of the gospel, but her husband (for supposing Myer's [sic] father to be dead, she married again) being so much opposed to the religion, she concluded not to be baptized then, and requested that one of her daughters should perform that rite for her if she failed to do it for herself. While there, on that visit, Elder Higley preached night and day, as the people would give him no rest. They sent for the smartest preachers in the country round, but their doctrines were not sufficiently substantial to stand before the gospel as expounded by the Elder who to get a little rest obliged to conceal himself, "or else," said he, "they would have preached me to death." He now discovered that his father was not dead, and that one of his brothers went to see him where he was established as a merchant in the City of New York. Having been brought into some disgrace through the treachery of a supposed friend while doing business for a rich man, Job Higley would not write of his whereabouts and concluded not to return home until he had regained both wealth and character, and when he afterwards possessed both, and learned that his wife was married again, he would not go to see his family. Elder Higley moved to Nauvoo in time to participate in the persecutions inflicted upon the Saints there. From Nauvoo he moved to Benton's Fort on the Des Moines River then to Council Bluffs, and from there to Uintah, Utah, in 1852, helping a family across the plains. He went from Uintah to Mountain Green, then to Morgan, and from there to Hooper where he resided until his demise. His family number eleven children, seventy-one grandchildren and fifty-six great grandchildren. He was tender hearted, strictly honest and a faithful devotee of Mormonism. His funeral service was held in the Relief Society Hall, and Bishop Belnap, Levi A. Cox and S. S. Johnson did honor to his memory. His remains were interred, with due solemnity, in the Hooper Cemetery.

Is Myron your ancestor? Please don't go away!

ask our community of genealogists a question.
Sponsored Search by Ancestry.com
DNA Connections
It may be possible to confirm family relationships with Myron by comparing test results with other carriers of his Y-chromosome or his mother's mitochondrial DNA. However, there are no known yDNA or mtDNA test-takers in his direct paternal or maternal line. It is likely that these autosomal DNA test-takers will share DNA with Myron: 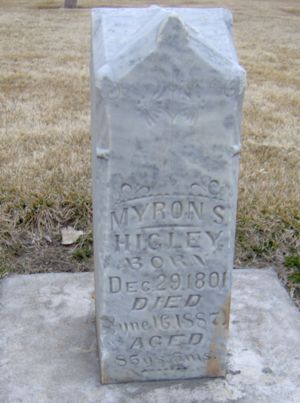