Libby was born April 1, 1850, at either at Bent Post later known as Benton Port, IA, or at Mosquito Creek, IA. Her parents, Myron and Priscilla, had joined the Church of Jesus Christ of Latter Day Saints in 1839 at Port Leydon, Lewis, NY, then traveled with a group of converts to Nauvoo, where the Higleys are listed on the registry as attending the temple on Jan 12, 1846. The group then traveled to Benton Port. Myron was a very religious and industrious man and an expert horseman. The family traveled to Salt Lake City in spring of 1851, then moved to Centerville, then to Mountain Green, where Myron had a farm, then to East Weber. In 1872, they settled in Hooper, where their last child was born.

Libby was the 10th of 11 children. Her sister Dorcas had died in 1864, leaving her husband Lee with two small children. Lee brought the children to Hooper to be raised by the Higleys. Since he was unable to find work in Utah at the time, Lee went to Council Bluffs to work with his brother John for about three years. When Lee returned to Hooper, he asked Libby to marry him. The first eight of their 16 children were born in Mountain Green, and their next seven children were born in Hooper. Their youngest child, Lawrence, was born in Mountain Green in 1894. The railroad had purchased a right of way through the farm in Mountain Green before it was completed in 1969. About 1896, they purchased the farm in Taylor, where they raised potatoes and other crops. They still had their youngest children at home, and several of their older children had moved to Idaho previously. When they retired from farming, they purchased a nice home in Shelley. Lee died on July 26, 1913, and Libby on December 13,1926, and both are buried in Taylor Cemetery.

Is Libby your ancestor? Please don't go away!

ask our community of genealogists a question.
Sponsored Search by Ancestry.com
DNA Connections
It may be possible to confirm family relationships with Libby by comparing test results with other carriers of her mitochondrial DNA. However, there are no known mtDNA test-takers in her direct maternal line. It is likely that these autosomal DNA test-takers will share DNA with Libby: 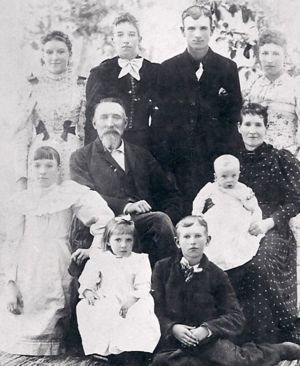