James Hill lived in 27 St. Andrew Street, Battersea, Surrey, England, on April 2, 1871 at 4 months old being looked after by his mother.

Between May 1871 and 1876 the whole family migrated to the United States of America.

His sister Amey was born in August 1876 in Cleveland, Cuyahoga, Ohio, USA, when James was 5 or 6 years old.

James Hill married Minnie (Minerva) A Milne in Cuyahoga, Ohio, on January 25, 1892, when he was 21 years old and living with the family at 4 Ellen Street, Cleveland, Cuyahoga, Ohio, USA

James Hill's mother passed away in 1922 and soon after James Hill Jr. died in 1926 at the age of 55 years old. James Hill Jr. his mother and father were buried in the plot at Ridge Road Cemetery Number 2, Brooklyn Ohio, USA.[7]

No record was located on the immigration from England to the USA. 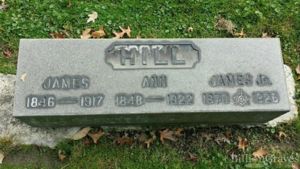