Herbert John Louis "Bert" Hinkler AFC DSM was born on 8th December 1892 at Bundaberg, Queensland, Australia. He was the eldest child of John Hinkler and Frances Bonney. [1] Flight captured his imagination from an early age. By 1912 he had successfully launched his own glider: it was displayed at the Brisbane Agricultural and Industrial Exhibition in the same year. Hinkler went to England to further his experience and found employment immediately at Sopwith Aeroplane Works.

In England, early in 1914, at the outset of the First World War, working "on the bench," he began "to learn the trade thoroughly." He enlisted in the Royal Naval Air Service (RNAS) in September 1914, and was already an experienced mechanic, observer and gunner with many aerial engagements behind him, when he qualified as pilot in 1918 with the Royal Flying Corps (RFC). He was awarded the Distinguished Service Medal during his service with the RNAS and later gained the rank of Squadron Leader. He was awarded the Air Force Cross.

Following the war Hinkler became a test-pilot and took part in air racing competitions, quickly becoming one of the world's best-known and accomplished pioneer aviators. Of the four aeroplanes associated with the name of Bert Hinkler the best-known is the Avro Avian preserved in the Queensland Museum. This is the single-engined bi-plane used by Hinkler on his pioneering solo flight from England to Australia in 1928. When Hinkler returned to England from Australia in 1928, he donated the Avro Avian to the Queensland Government; ensuring its preservation.

Bert Hinkler married Katherine Rose (under the assumed name of Herbert Bonney to avoid publicity) on 21st May 1932 in Connecticut, United States of America. [2][3] He was killed less than eight months later.

On 7th January 1933 he left England in his De Haviland Puss Moth intending to fly to Australia. Nothing further was heard and an extensive search failed to locate him. On 28th April 1933 the wreckage of his aircraft was discovered on Castela S Nicollo in the Prato Magno Alps, east of Florence in Italy. The position of Hinkler's body indicated that he survived the crash. He was buried with full military honours in Florence on 1st May 1933 Italy on the orders of Mussolini himself.

"Hinkler was dedicated to the ideal of aviation as a safe, comfortable, fast and certain means of transport. By application and training he became an expert pilot, navigator, mechanic and designer. Quiet, capable, determined and cheerful in adversity: these are the characteristics of Hinkler as they emerge from the statements and opinions of his contemporaries, his personal correspondence, the book which he commenced to write, and the Ibis amphibian which stands as a monument to his designing ability." [4]

In his Will, Administration of which was granted on the 23rd June 1933, in London, to Katherine Hinkler widow, Herbert John Louis Hinkler, of Mon Repos Scholing near Southampton, died 7 January 1933 at Castel S Niccolo Arezzo Italy left effects to the value of £906 10s 10d. Resealed in Brisbane on 7th February 1934.[5]

posted 17 Aug 2016 by James Dale   [thank James]
James Dale
An Australian aviation pioneer has been honoured with a memorial stone and a hiking path in the Apennine mountains, where he died in a plane crash in 1933.

HUMPHRY— BONNEY :— A wed ding of interest to Townsville dls trict and to Brisbane was solemnised on May 24, nt Saint James Cathedral by the Rev. R. Innes, a friend of the family, who came from Ayr to perform the ceremony. The bridegroom, Ernest V. Humphry, is the elder son of Mr. and Mrs. J. L. Humphry, Giru, and grandson of the late Dr. E. Humphry. The bride, Miss Noela Bonney, is the younger daugh ter of Mr. and Mrs. H. A. Bonney, Newmarket, Brisbane, and a cousin of Mrs. Bonney, noted aviatrix, and the late Bert Hinkler. Townsville Daily Bulletin Fri 1 Jun 1945 Page 3 Family Notices [1]

ask our community of genealogists a question.
Sponsored Search by Ancestry.com
DNA
No known carriers of Bert's ancestors' DNA have taken a DNA test. 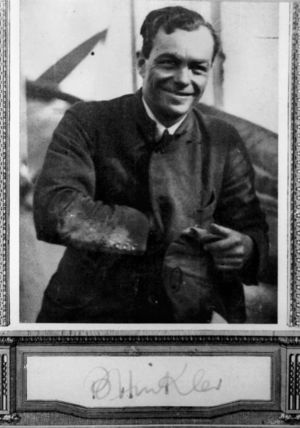 Melanie Paul
Just as an alert -- I have nominated Bert for next week's Connection Finder. That does not mean he will be selected, but if there's anything that is needful to spruce up his profile, now is the time to do it!  :)
posted Aug 17, 2021 by Melanie Paul