Born 13 August 1899, Sir Alfred Joseph Hitchcock, KBE, was an English film director and producer who paved the way, pioneering several techniques in the suspense and psychological thriller genres. After great success in both silent films and early talkies and being renowned as England's best director, Sir Alfred moved to Hollywood in 1939, and in 1955 became a U.S. Citizen.

In a career spanning nearly six decades, Hitchcock directed over 50 films, establishing for himself a unique and distinctive style. He led the way in using the camera to move in a way that mimic's a person's gaze and framed shots to maximize anxiety and fear. A 2007 article from Britain's Daily Telegraph said this about Sir Alfred: "Unquestionably the greatest filmmaker to emerge from these islands, Hitchcock did more than any director to shape modern cinema, which would be utterly different without him. His flair was for narrative, cruelly withholding crucial information (from his characters and from us) and engaging the emotions of the audience like no one else."

Hitchcock received two Golden Globes, eight Laurel Awards, five lifetime achievement awards and in 1980 received knighthood when he was appointed a Knight Commander of the Most Excellent Order of the British Empire (KBE), by Queen Elizabeth II. Sir Alfred died later that same year on 29 April.

My great-grandmother, Christel Dunn, was Hitch's personal chef for about 30 years. She died before I was born, but I've heard many wonderful things about him through my grandmother, who visited the house often. Mr Hitchcock was a very kind man, and she loved working for them. I was told he even mentioned her in one of his acceptance speeches. I wish I could've met him.

This message is from Summer Seely (ezrawcooper@yahoo.com). Click here for their WikiTree profile: http://www.WikiTree.com/wiki/Seely-210

The sender was on this profile page when they sent the message: http://www.WikiTree.com/wiki/Hitchcock-961

posted 2 Jan 2017 by Craig Hitchcock MBE   [thank Craig]
Craig Hitchcock MBE
I remember as a child that at least one of my Aunts said that "Grandad" ... that's my paternal Grandfather (Hitchcock-956) ... was a second cousin, twice removed. of Alfred Hitchcock. This statement was re-affirmed only very recently at a family reunion for my Mother's 90th birthday, by one of my cousins whom I hadn't seen for 50 years!

Coupled to that the fact that my paternal grandfather, my father (Hitchcock-948) and his two brothers who were killed in WW2 (Hitchcock-957 and Hitchcock-960) all worked in the Film Industry. 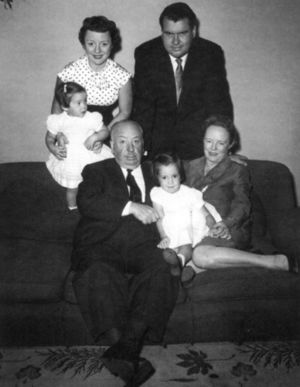 Beryl Meehan
The Dark Side of Genius: The Life of Alfred Hitchcock by Donald Spoto.

Alfred is 45 degrees from Donald Howard, 44 degrees from Julia Howe and 36 degrees from Henry VIII of England on our single family tree. Login to find your connection.