Moses Paquette says in his memoir: "Young Winneshiek is now living on the Black river, seven miles above Black River Falls. He is about sixty years old, and a good Indian; he is the head man in Jackson county, being a descendant of the famous Winneshiek. He has but one wife and no children. He returned from the reservation to his native state in 1872 or 1873, and is now doing fairly well on his little purchased farm of forty acres, his homestead being some four or five miles away. Cultivating his land with reasonable display of energy, he is regarded by the whites as a progressive Indian, and has a good reputation among them."

"Short Wing Winneshiek settled in Wisconsin and died at Black River Falls about 1886. In February 1876 Short Wing and other chiefs, including Little Decora, initiated a successful process to attain homesteads for their people, who became the Ho-Chunk Nation of Wisconsin. (Waggoner, 43)

Waggoner (47, nt. 94) says, "Hounka was likely Coming Thunder Winneshiek’s brother, not son. Winneshiek’s father, who died in 1848, was Chief Mawaragah Winneshiek. He had four sons, only two of whom were well known: Coming Thunder, the eldest, and Short Wing. His other sons were probably Hounka or “Hoon kaw” and Ben Winneshiek. Coming Thunder in turn had three sons whose English names were John, George, and Little Winneshiek. Hughes thought that George might have been Hounka, but I disagree, because he was too young. The 1857 annuity rolls (101) show the following consecutive heads of family: Nau he Kaw [or fourth-born son, probably Ben Winneshiek]; Winnoshik [Coming Thunder]; Hoon Kaw; Wau sho pe we kaw [Coming Thunder’s mother]. Hau kaw kaw [or third-born son, who was probably “Ha-ya-ka-kay,” brother of “Hoon kaw,” otherwise known as Short Wing].

"January 1882: Old Winneshiek, head chief of the Winnebagos, residing near Black River Falls, died December 30th aged 78 years. The old chief was well known in this region and generally esteemed for uprightness and honesty. The Indians are all in deep mourning on account of his death. He had in his possession a medal presented to his father as a token of friendship by James K. Polk, president (1845-1849) of the United States, many years ago. It was highly prized by him. Winneshiek had several times represented his tribe as a delegate to Washington, and had been present at many important Indian tribe councils in the West. He left a son, Big Fire (or Medicine Smoke) who will probably succeed him." (Clark Press)

Thank you Richard Dieterle for the research into and creation of this profile. See his contributions to this profile.

Is Short Wing your ancestor? Please don't go away!

ask our community of genealogists a question.
Sponsored Search by Ancestry.com
DNA
No known carriers of Short Wing's ancestors' DNA have taken a DNA test. 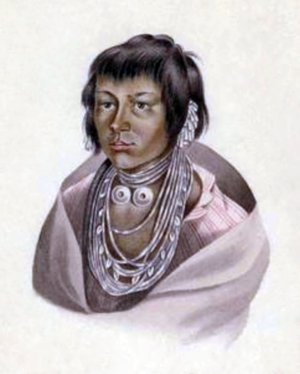