Father of John Kužigiwega Winneshiek, Wihąnįka (Winneshiek) Blackhawk, George Wakąjanįka Winneshiek and Nójįga Winneshiek
Died about 1864 at about age 52 in the village of the Iowas on the western side of Missouri near the line between Nebraska and Kansas

Wakąjaguga is conventionally translated as "Coming Thunder." This is from Wakąja, "Thunderbird"; gu, "to leave returning, to leave to go home"; and -ga, a definite article suffix used in personal names. So the real meaning of the name is "Thunderbird Leaving for Home." It is, perhaps needless to say, a Thunderbird Clan name.

“His descendants say that his son, Coming Thunder, was born about 1812 at Portage, Wisconsin. (Jipson, 212)

“In person Winneshiek (Coming Thunder) has been described as medium sized, with black mustache and chin whiskers. He always wore goggles and usually carried a pipe." (Jipson, 221)

"In belief he adhered strictly to Indian customs and rites. His followers were called blanket Indians and really constituted one half of the tribe. He was possessed of much native shrewdness, but was very hospitable and, as he was a good hunter, his larder was unusually well supplied, and his guests were royally entertained. He was no orator, but on occasions demanding a forceful presentation of his views or a statement of his wrongs, he was represented by Weeru-kana-ga (The Leader) known to the Whites as “Buffalo”, a member of the Buffalo clan. From the time, when, as a lad of fifteen, his face showing hatred and defiance, he dared his white pursuers to do their worst, until the day of his death, his spirit was never broken, and unlike some of his brother chieftains he was never cowed, but continued to assert and demand his rights. He divined the sinister motives of the government officials and seldom did he recede from his position. But withal he was usually kind and hospitable to both Whites and Indians, and it can safely be asserted that he was both morally and intellectually the superior of many of the white officials with whom he was compelled to deal.” (Jipson, 221-222)

"Winneshiek’s involvement was grounded in kinship, as his maternal grandfather was a Sauk man and his maternal uncle, White Cloud (known as 'the Winnebago Prophet'), was Black Hawk’s principal spokesperson. The Ho-Chunk’s avuncular kinship system imparts a close relationship between a mother’s son and her brother that entails obligations on both sides." (Waggoner, 29b)

Waggoner says (43), "In May of 1864 the Omaha Indians and their agent held a council with Winneshiek and his brother, Short Wing. The record of the council is the last time Winneshiek’s name appears in records. Apparently on his way back to Wisconsin, he “was taken sick” and “died at the village of the Iowas on the western side of Missouri near the line between Nebraska and Kansas.” Some say his death occurred shortly after the Omaha council, others say not until 1872."

Is Coming Thunder your ancestor? Please don't go away!

ask our community of genealogists a question.
Sponsored Search by Ancestry.com
DNA
No known carriers of Coming Thunder's DNA have taken a DNA test. 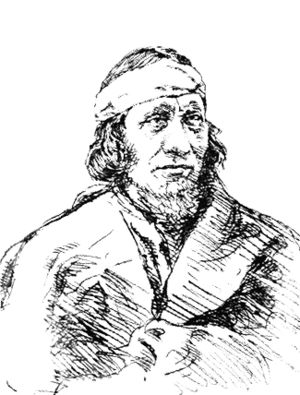 Winneshiek (Center with Beard) Surrounded by His Warriors 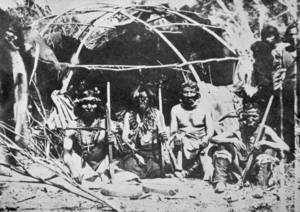 Richard Dieterle
The name "Coming Thunder" is that by which he is best known. The Hochunk name of which it is a translation, is known to a few historians. Given that most HoChunks do not speak HoChunk, it is better to lead with the English version by which he is best known, otherwise his fundamental name will be missing in the heading. That's why, generally, I put the HoChunk name in the Middle Name position. "Winneshiek", btw, is a rare case of a native name that functions in a way equivalent to a Western surname.
posted Mar 03, 2021 by Richard Dieterle