Mąkskaga (Ho-Chunk) White Breast was a Native American and member of the Ho-Chunk tribe.

Chief White Breast = Mą́kskaga — a War Chief and member of the Bear Clan. His father was named Kee-zuntsh-ga [Kizų́čka], "Soft-Shelled Turtle," and had a village at Lake Koshkonong. Kizų́čka's father was Ma-sho-pa-ka [Mąčopaga], meaning "Grizzly Bear Head." White Breast had a brother called Na-xee-zheb-ga [perhaps, Naxi, "Fourth Born," and Sepka, "Black"]. White Breast's wife was named Hopink-ah [Hopįga, "Good Voice"], and at least two daughters, Onck-say-onc-ah [probably for Haksagā, "Third Born Female"], and No-waw-chock-wink-ah [Nąwáčakwįka, "Fortress Woman"]. His first son was named, Mau-na-suntsh-ga [Mąnąksųčka], "Shakes the Earth by the Force of His Step"; his second son bore the name, Shounk-mau-no-nee-ga [Šųgᵋmąnųnįga], "Lost Dog" (probably a nickname); his third son was called, Mau-chgoo-[w]a-shiste-ga [Mąčguwąšiška], "Breaks the Band [Bow] with the Force of His Feet." The male names seem to be those found in the Bear Clan, which does not supply village chiefs, but in this case we may conclude that he was the War Chief of the villages named. (quoted from Dieterle, citing Waggoner, 22b; Jipson, Story, 234-235; Jipson, Villages, 127)

His grandson, Ely Rasdall, told Jipson (Story, 235) that “White Breast was a member of the bear clan, and that he was considered a great warrior, and at various times prior to the Black Hawk War, he led four war parties and never lost a man; that he was one of the leading scouts during the Black Hawk War."

Later, in 1835, with Little Priest, he had a village on the Wisconsin River. Both of his daughters married Abel Rasdall. The photograph of White Breast was made by R. A. Lewis in 1865, when a number of Hočąk chiefs had traveled east for treaty negotiations. (quoted from Dieterle, citing Waggoner, 22b; Jipson, Story, 234-235; Jipson, Villages, 127)

Ely Rasdell told Jipson (Story, 235), "He died in Minnesota just as the Winnebagoes were being removed from that state.” This is not quite right, since the Winnebago were removed in 1863, and we have Lewis' photo of him from 1865. This probably means that he died around 1866.

Thank you Richard Dieterle for the research into and creation of this profile. See his (pre-rename) contributions to this profile.

Is Mąkskaga your ancestor? Please don't go away!

ask our community of genealogists a question.
Sponsored Search by Ancestry.com
DNA
No known carriers of Mąkskaga's DNA have taken a DNA test. 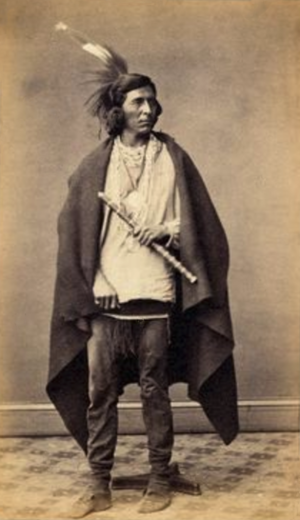 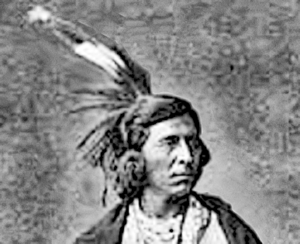