Wakąjagiwįxka (Ho-Chunk) Whirling Thunder was a Native American and member of the Ho-Chunk tribe.

His Hocąk name is Wakąjagiwįxka, sometimes given as Wakąjawįxka, which really means "Whirling Thunderbird." This name is from Wakąjá, "Thunderbird"; giwįx, "whirling"; -ka, a definite article suffix used in personal names.

General Anderson says, "Whirling Thunder and Little Priest appeared to be about thirty-five years of age, I can say but little of either, save that Whirling Thunder was morose and sullen in his appearance, and had the reputation of being cruel. He was short and thick-set, not more than five feet, eight inches in height." (Anderson, 191) However, Washburne (253) says, "Whirling Thunder was a man of great repute for his sagacity and wisdom in council." Col. Dodge briefly detained Whirling Thunder and two other chiefs as security for the good behavior of the tribe during the Black Hawk War. (Strong, 272) However, probably due to the fact that his son Mą́zᵋmąnį́ga (Iron Walker) killed Pierre Paquette, "Whirling Thunder had fallen into disgrace with the other chiefs, as he did not live in the country with the Nation; but lived in the Mines, pitching his wigwam near the dwelling of a man by the name of Doherty, who had taken Thunder's daughter for his wife; and as Pauquette, Doherty thought, stood in his way of influence with the Nation, as well as trade, it was believed he felt it in his interest to prejudice the chief and his son against Pauquette, and the son got so wrought up that he determined to make way with him." (Merrell, 388-389)

“By some authors Whirling Thunder is said to have died in the Turkey River country in Iowa. William Johnson, an elderly Winnebago, who is said to be an authority on the history of the tribe told Oliver Lamere that Whirling Thunder was in the Blue Earth country, and he may have died there.” (Jipson, 237)

Thank you Richard Dieterle for the research into and creation of this profile. See his (pre-rename) contributions to this profile.

Is Wakąjagiwįxka your ancestor? Please don't go away!

ask our community of genealogists a question.
Sponsored Search by Ancestry.com
DNA
No known carriers of Wakąjagiwįxka's DNA have taken a DNA test. 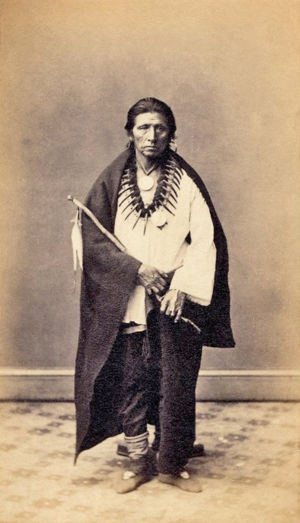