He died on 10 June 1190 in Anatolia (Asia Minor - now Turkey), at 68 years old, drowning, leading troops returning from the Third Crusade. His men had trouble getting his body back home.[2] It started to melt in the summer heat.[2] Needless to say... he never made it back and his parts are buried in three churches.

"St. Peter’s itself, ringed with strongpoints and hastily dug trenches. For eight more days it held out; it was only when the besiegers set fire to the forecourt, destroying the great portico so lovingly restored by Innocent II and finally hacking down the huge portals of the basilica itself, that the defending garrison surrendered. Never had there been such a desecration of the holiest shrine in Europe. Even in the ninth century, the Saracen pirates had contented themselves with tearing the silver panels from the doors; they had never penetrated the building. This time, according to a contemporary—Otto of St. Blaise—the Germans left the marble pavements of the nave strewn with dead and dying, the high altar itself stained with blood. And this time the outrage was the work not of infidel barbarians but of the emperor of Western Christendom.

St. Peter’s fell on July 29, 1167. On the following day, at that same high altar, the Antipope Paschal celebrated Mass and then invested Frederick—whom Pope Hadrian had crowned twelve years before—with the golden circlet of the Roman Patricius—a deliberate gesture of defiance to the Senate and People of Rome. Two days later still, he officiated at the imperial coronation of the Empress Beatrice, her husband standing at her side. Pope Alexander had no alternative; disguised as a simple pilgrim, he slipped out of the city and made his way to the coast, where he was discovered—fortunately by friends—three days later, sitting on the beach and waiting for a ship. He was rescued and taken to safety in Benevento."

Sponsored Search by Ancestry.com
DNA
No known carriers of Friedrich I Barbarossa's DNA have taken a DNA test.

Images: 2
Golden bust of Barbarossa in his likeness 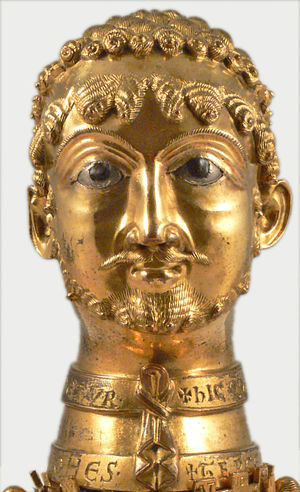 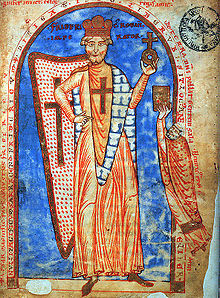 Gino Baracchi
He was half-brother (not father) of Frances (Hohenstaufen) d'Aquino that was daughter of Friedrich II (one eyed) duke of Schwabia and his second wife Agnes of Saarbrücken, while he was son of his first wife Judith Bayern.

Children and siblings shall be arranged accordingly , but the system does not accept editing. Baracchi-1 2020/2/17