Heinrich was born in 1211 in Sicily, probably in either Palermo or Messina. He is the son of Friederich II von Hohenstaufen and Constance Aragon.
At the age of 1 he was crowned king of Sicily under the regency of his mother. When he was 4 his father made him Duke of Swabia (Herzog von Schwaben) and in 1219 Rector Burgundiae. In 1220 his father arranged for him to be elected King of the Romans (Römisch-deutscher König).
Following his father's wishes he married in 1225 the seven years older Margarethe von Babenberg.
After he took over the reigns of the kingdom for himself in 1228 he became increasingly in conflict with his father which led to his eventual imprisonment in 1235, first in Heidelberg, then in castle Alerheim near Nördlingen. Apparently his father feared a rebellion in favor of Heinrich and had him moved to the Kingdom of Sicily in 1236. There he was kept in various prisons in chains, in vinculis teneretur. When he was moved again to a different castle in February 1242 he and his horse fell into a ravine leading to his death in Martirano.
From a recent (1998) recognition of his grave in Calabria (Italy) it was found that, besides a damage to his right knee that justify his surname "the lame", he was suffering of leprosy. This, added to his condition of prisoner for life, supports the speculations that he died committing suicide.[1][2][3]

Is Heinrich VII your ancestor? Please don't go away!

ask our community of genealogists a question.
Sponsored Search by Ancestry.com
DNA
No known carriers of Heinrich VII's DNA have taken a DNA test. 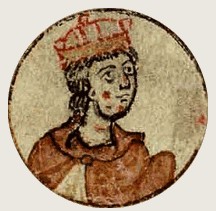 Gino Baracchi
Hohenstaufen-73 and Hohenstaufen-50 appear to represent the same person because: The parents and Death date are the same. (siblings not complete. to be edited) The first name of spouse is the same but not the FNAB.

Heinrich VII is 26 degrees from Donald Howard, 21 degrees from Julia Howe and 10 degrees from Henry VIII of England on our single family tree. Login to find your connection.