pretender to the title of King of the Romans from 1212 and unopposed holder of that monarchy from 1215.
King of Germany, Italy, and Burgundy.
King of Jerusalem by marriage and Sixth Crusade.

At age of three crowned King of Sicily, his right:

Constance d'Hauteville (or d'Altavilla) in her own right queen of Sicily; she had Frederick made King of Sicily and established herself as regent. In Frederick's name she dissolved Sicily's ties to Germany and the Empire that had been created by her marriage, sending home his German counsellors (notably Markward von Annweiler and Gualtiero da Pagliara) and renouncing his claims to the German throne and empire. Frederick was crowned King of Sicily on 17 May 1198.

NOTE: the numerals following the first name are relative (and possibly different) to each title and generally referred to the most important title belonging to the person. For instance Federich II Holy Roman Emperor was at the same time Ist king of Sicily and VII king of Germany. He was nephew of Frederich I Barbarossa Holy Roman Emperor, etc. and both are different persons from Frederich II duke of Schwabia, but all of them belong to Hohenstaufen family of the dukes of Schwabia.

Frederch II was the most astonishing Personage of his time at the end of Middle age and surprising modern. He spoke fuently 6 languages: latin, sicilian (proto-italian) french, german, greek and arabic and was an avid patron of science and arts. A man of extraordinary energy,culture and abiity, was called by contemporary chroniclers "Stupor mundi" (The wonder of the world) and is considered the first modern ruler as he succeeded to make his Southern Italy Kingdom a centraly administered state with an efficient bureacracy. This did not happen for northern Italy, where he had to fight, like his grandfather Barbarossa the prevailing indipendent municipalities hostile to the Empire and in Germany were the Princes and Dukes wanted to remain indipendent. But the main ennemy was the Pope that was afraid of remaining between hammer and anvil if Germany and northern Italy on one side and Sicily and Southern Italy on the other side of the Church state were run by the same ruler. When his mother Costanza died few years after his Birth left him under the care of the Pope that sent to Palermo suitable protectors that in general succeeded to keep away tutorship from Germany. When he had grown up and taken power was often at war with the Pope and was excommunicated four times

Error 723 (prefix in 1st name) corrected, according to guidance @ https://www.wikitree.com/wiki/Help:Name_Fields_for_European_Aristocrats

Other Comments to the Profile Mgr 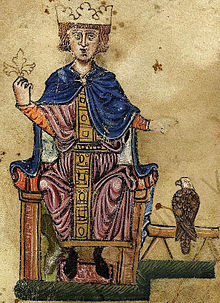 Coat of Arms of Frederick II

Frederick II is 24 degrees from Jaki Erdoes, 19 degrees from Wallis Windsor and 10 degrees from Henry VIII of England on our single family tree. Login to find your connection.