It is assumed he emigrated with his parents, but uproven. Other family members are shown on the passenger list of the Marygold, William is missing.[1][2]

He lived at Weymouth until 1663, when he removed to Mendon. After the indians drove him back, in 1676, he settled in Scituate.[5]

Elizabeth died at Scituate, Massachusetts in 1696. He married secondly, about 1696, Abigail Wright, who survived him. William was her third husband. [6] Abigail was the widow of Robert Sharp and Thomas Clapp, both of Scituate.[5] [7]

His will was written on September 9, 1696. In it he names: [Note: The copy of his will spans across 2 pages and is difficult to read as such]

by Elizabeth born at Weymouth [5] 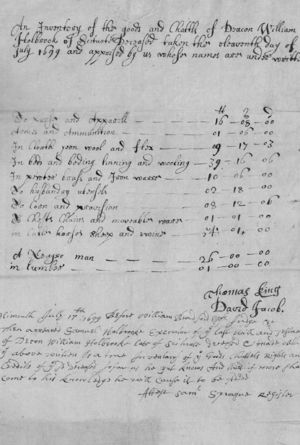 Will of William Holbrook - p. 1 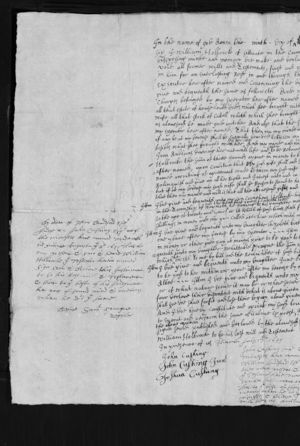 Will of William Holbrook - p. 2 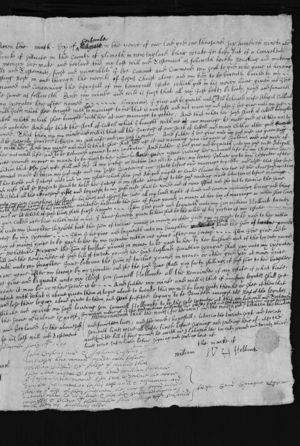 Leave a message for others who see this profile.
There are no comments yet.
Login to post a comment.
Katherine Cappon
https://babel.hathitrust.org/cgi/pt?id=njp.32101067881407&view=1up&seq=274

Below is exactly how it is entered in History of Weymouth, Massachusetts Vol 3, page 270 3. CAPT. WILLIAM? HOLBROOK (Thomas') was born in England near 1627; died at Scituate 3 July, 1699. He married (1) Elizabeth —, daughter of widow Elizabeth Pitts, who died at Scituate in 1696. He married (2) Abigail , who survived. She was widow of Robert Sharp and of Thomas Clapp of Scituate. He re resided in Weymouth till about 1663, when he removed to Mendon. The Indians drove him back in 1676 and thereafter he settled in Scituate. He made his will 9 Nov. 1696, providing for his wife Abigail. To his son Cornelius he gave his lands in Weymouth, he to pay his own daughter Mehitable Holbrook £5 at marriage. He bequeathed to his daughters Elizabeth Buck, Hopestill Reed, Mehitable Sprague and Jane Balcom, and to his son William, and Samuel, whom he calls eldest son.

The Persis that married John Farrow was the Child of Samuel and Mary Holbrook. John, Millicent, and Experience not listed as children in this source. The Persis listed as a child of William has been questioned in other sources as confusion between this Persis and Samuel's daughter Persis who married John Farrow. "Massachusetts Births and Christenings, 1639-1915", database, FamilySearch (https://familysearch.org/ark:/61903/1:1:FCQR-NR4 : 14 January 2020), Samuell Holbrook in entry for Persis Holbrook, 1676.

above for your thoughts and consideration

Jillaine Smith
While he was not apparently on ships list, the article Chris links to points out the trouble with these early lists. William may have come later or may have been on the same ship and simply not listed. We don't know. We know he was born in England and died in New England-- and that he presumably emigrated prior to 1640, so yes, let's add PGM to his profile. Thanks, Chris.
posted Apr 21, 2018 by Jillaine Smith
Chris Hoyt
Should he be PGM? see: p. 9-10 in The Trouble With Thomas Holbrook in

Hotten: James C. The Original Lists of Persons of Quality; Emigrants; Religious Exiles; Political Rebels; Serving Men sold for a term of years; apprentices; children stolen; maidens pressed; and others who went from Great Britain to the American Plantations, 1600-1700 : with their ages and the names of the ships in which they embarked, and other interesting particulars; from mss. preserved in the State Paper Department of Her Majesty's Public Record Office, England, London, England, 1874, p.285

posted Apr 21, 2018 by Chris Hoyt
Chris Hoyt
The William Holbrook that married Elizabeth Pitts was the son of Thomas and Jane Powys Holbrook. See Holbrook-3. They should be corrected and then merges. See: Thomas Holbrook - son William -