Hodgen Holmes, originally from South Carolina, developed and then patented the sawtooth gin for the removal of seeds from cotton in 1796 in Augusta, Georgia. However, just before this, in 1794, Eli Whiney had patented his cotton gin, using a wire brush, called a "tooth gin" (a bit different from Holmes).

Holmes had come up with his idea earlier, in 1792, but hadn't completed the necessary patent work before Whitney. So Whitney received the credit for helping to make the production of cotton very important in the American South, simply because of timing, according to family who claimed Holmes was the "real inventor of the Cotton Saw Gin which Eli Whitney purloined."

Whitney did use Holmes' saw tooth method in his later models.

Henry Ogden Holmes worked on the Kincaide plantation of Fairfield County, South Carolina. He was a plantation manager/blacksmith who received a patent on May 12, 1796 for an improved gin.[1] 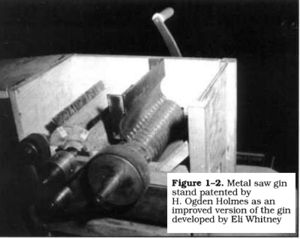 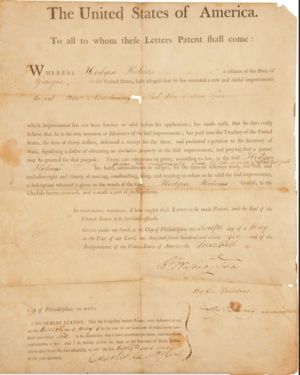 Jay Byrne Jr.
Holmes-3 and Holmes-2178 appear to represent the same person because: Hogden Holmes, by most reports, actual name was Henry Ogden Holmes. Please consider merging these or deleting this duplicate to clean up the Wiki. Thanks.
posted Jul 08, 2015 by Jay Byrne Jr.