Joseph Hooker was Wounded in Action during the United States Civil War.

'A career United States Army officer and Mexican-American War veteran, Hooker was appointed in 1861 as a brigadier general of the Union Army. Hooker began the war commanding a division of the Army of the Potomac around Washington DC under Major General George McClellan.[1]

One of the most immodest and immoral of the high Union commanders, "Fighting Joe" Hooker frequently felt slighted by his superiors and requested to be relieved of duty. The Massachusetts native and West Pointer (1837) had been posted to the artillery but was serving as a staff officer when he won three brevets in Mexico. Unfortunately for his later career he testified against Winfield Scott before a court of inquiry on the Mexican War. After a two-year leave he resigned on February 21, 1853, to settle in California where he was in the farming and land businesses. [2]

Hooker was born in Hadley, Massachusetts on November 13, 1814, the son of Joseph Hooker, an unsuccessful businessman, and Mary Seymour. His great-grandfather, Joseph Hooker, fought in the French and Indian War (1755–1763), and his grandfather, also of the same name, was a captain in the Continental army during the Revolutionary War (1775–1783).[3] He was of entirely English ancestry, all of which had been in New England since the early 1600s.[4] His initial schooling was at the local Hopkins Academy.

At the outbreak of the Civil War, Hooker was a bachelor with a reputation for drinking, gambling, womanizing, and hotheadedness.[3]

He graduated from the United States Military Academy in 1837, ranked 29th out of a class of 50, and was commissioned a second lieutenant in the 1st U.S. Artillery.

Brevetted major general in the regular army for Chattanooga, he was mustered out of the volunteers on September 1, 1866, and two years later was retired with the increased rank of major general. Always popular with his men, he lacked the confidence of his subordinate officers and was quarrelsome with his superiors. His nickname, which he never liked, resulted from the deletion of a dash in a journalistic dispatch that was discussing the Peninsula Campaign and "Fighting" was thereafter linked to his name. Popular legend has it that his name was permanently attached to prostitutes from his Civil War actions in rounding them up in one area of Washington. He died in Garden City, New York, on October 31, 1879, and is buried in Cincinnati. (Herbert, Walter H., Fighting Joe Hooker) [5]

Mustered out of service in 1866, he retired from the Army in 1868, He died on a visit to Garden City, New York, and is buried in Spring Grove Cemetery, Cincinnati, Ohio,[7] 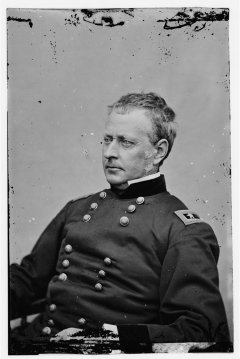 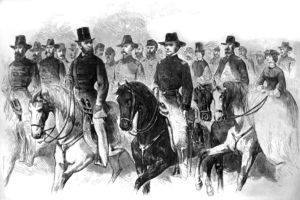 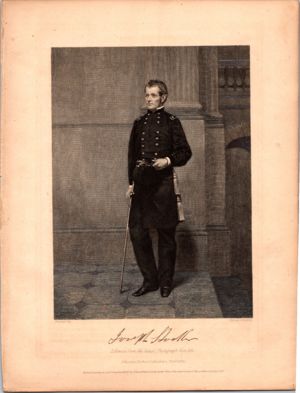 Vicki Norman
I am working on the Civil War project in WikiTree and focusing on the Battle of Chancellorsville. Joseph Hooker was one of the primary Generals in this battle. I would like to be added to the Trusted List so I add more to his biography and link him to the project and images.
posted Jun 11, 2014 by Vicki Norman