Stephen Hopkins was a Founding Father in the American Revolution

Stephen Hopkins was a governor of the Colony of Rhode Island and Providence Plantations and a signer of the Declaration of Independence.[1]

He was the son of William Hopkins and Ruth Wilkinson,[2] and was born on March 7, 1707 in then Providence, Providence County, Colony of Rhode Island and Providence Plantations. [3]

Governor Hopkins said of himself, "Stephen Hopkins of Providence, in the county of Providence, was born in Cranston."[4] This was dated Feb. 3, 1754. Cranston was incorporated in 1754.[5] Foster, the author of a Hopkins biography, then asks the question, where exactly were his parents living in 1707. Hopkins determined that they lived in what was then designated as Providence. Arnold's "Rhode Island Vital Records" records his birthplace in Providence but says he was born in Scituate.[3] Scituate was not settled until 1710, and was part of Providence until 1731. When the citizens of Scituate held their first town meeting, at the Angell Tavern in South Scituate, Stephen Hopkins was elected as the first moderator.[6]

Hopkins was raised as a Quaker and trained to be a farmer. However, he was employed primarily as a surveyor.

He had little formal education and was taught by his mother. She inspired him to be a prolific reader of Greek, Roman and British history. Despite his informal training, he made the most of it and attained great success in life.

After the death of Sarah, Stephen Hopkins, of Providence, remarried 2 March 1755, in Smithfield, Providence County, to Ann Smith, widow[3] (1717-1782). She was the daughter of Benjamin Smith, of Providence, (her first husband had the same surname, but no relation). She was thirty-eight years old at the time of her second marriage, and brought with her three living children, Benjamin, Ruth, and Amery. It is said that Stephen Hopkins became very fond of his stepchildren and the feeling was mutual. His son George married Ann's daughter Ruth.[8]

Sponsored Search by Ancestry.com
DNA Connections
It may be possible to confirm family relationships with Stephen by comparing test results with other carriers of his Y-chromosome or his mother's mitochondrial DNA. However, there are no known yDNA or mtDNA test-takers in his direct paternal or maternal line. It is likely that these autosomal DNA test-takers will share DNA with Stephen: 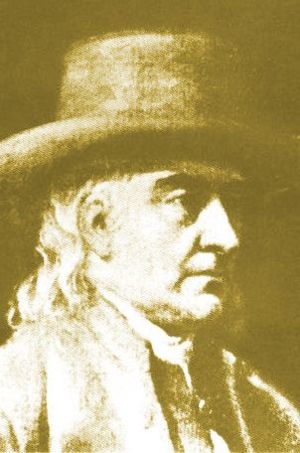 Hopkins (dozing at the table) and other Rhode Island merchants in Sea Captains Carousing in Surinam, a 1750s satirical painting by John Greenwood 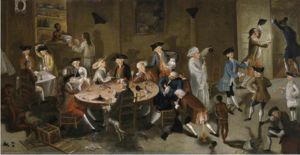 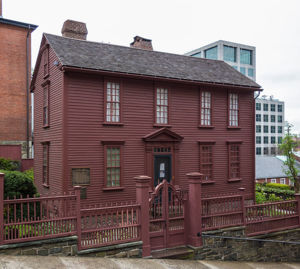 SJ Baty
Image 2: Portrait detail as depicted in "Declaration of Independence" by John Trumbull (1819), Independence National Historical Park. Since Hopkins had long-since died, Trumbull based his portrait of Hopkins on his nephew who was said to have looked just like Stephen Hopkins. More recent scholarship suggests that this figure not to be Stephen Hopkins (or his nephew) at all, and is actually Pennsylvania's John Dickinson. Both Hopkins and Dickinson were Quakers that wore the same traditional broad brimmed hat while in public.
posted Nov 16, 2019 by SJ Baty

Stephen is 14 degrees from Cecil B. DeMille, 20 degrees from Rosalie Neve and 13 degrees from Henry VIII of England on our single family tree. Login to find your connection.