Constance Snow formerly Hopkins aka Snow
Born before 11 May 1606 in Hursley, Hampshire, England

Nicholas Snow was born around 1599-1603 in England. His parents are not known.[1] He arrived in Plymouth on the “Anne” in 1623. He married before 1 Jun 1627 in Plymouth, Plymouth Colony, New England, to Constance Hopkins. He and Constance were among the first settlers of Eastham, on Cape Cod, across Plymouth Bay, in 1644.  He was a freeman, in Eastham in 1655, and served in many town offices.  Nicholas died 15 Nov 1676 in Eastham, Plymouth Colony, and is buried in the Cove Burying Ground, Eastham.

Constance Hopkins was baptized 11 May 1606 at Hursley, Hampshire, England.  Her parents were Stephen Hopkins and Mary (Kent) Hopkins. Constance was a Mayflower passenger, along with her father and stepmother, Elizabeth (Fisher) Hopkins. Two other children accompanied them and Elizabeth had a baby during the voyage.

Constance (Hopkins) Snow died about 15 October 1677 in Eastham, Plymouth Colony, and is buried in the Cove Burying Ground, Eastham, Cape Cod, near her late husband.

That first spring in the new land, the colonists looked on as the two young men, Edward Doty and Edward Leister, carried on a dual courtship for the hand of pretty Constance [Hopkins]. On 18 June 1621, the colonists were awakened at dawn by the sound of the clash of cold steel. Rushing outside, they found Leister and Doty slashing away at each other in a duel.

"They were quickly disarmed and haled before Governor Bradford, who ordered them strung up with head and heels tied together so they could cool off their hot blood." Governor Bradford said later that "Edward Doty retrieved his character by change from youthful folly."

The fair Miss Constance never married either swain. Instead, she later married the honorable Nicholas Snow, one of the founders of Eastham, Barnstable County, Massachusetts.

The information just below is from: the Pilgrim Hall Museum.

Constance Hopkins was a Mayflower passenger. She journeyed with her father and stepmother, Stephen and Elizabeth Hopkins, her brother Giles, her half-sister Damaris and her half-brother Oceanus who was born during the voyage.

Sometime before 1627, Constance Hopkins married Nicholas Snow. Nicholas Snow had arrived in Plymouth on the Anne in 1623.

The inventory of Nicholas’ estate, taken at the time of his death, includes carpenter’s tools. This may have been his trade. His inventory also included books, so he was most-likely literate. Nicholas held various minor positions in Plymouth, such as highway surveyor.

The Snows moved from Plymouth to Nauset, on Cape Cod in 1643. The town was then renamed "Eastham" and still retains that name today, nearly 400 years later. On the Cape (in Barnstable County), Nicholas served as surveyor, constable and selectman. He was a carpenter and also ran a family farm with the help of his sons and daughters.

Constance and Nicholas Snow had 12 children. Nicholas died in November 1676, Constance about a year later in October of 1677. Before his death, Nicholas Snow wrote a will. See below.

The Pilgrim Society displays one artifact that is attributed to Constance Hopkins. It is a beaver hat, made in England, c.1615-1640. Steeple crowned hats, usually with a decorative band, were popular for both men and women in the early 17th century. Beaver fur, imported into England from the colonies, was processed into felt to make hats.

Constance Hopkins had a younger brother, Giles Hopkins, born in Hursley, Hampshire, England, in 1607. Their father, Stephen Hopkins, by all accounts a world-traveler and adventurer, left his family in the care of their maternal grandmother, "the widow Kent," in Hursley, while he traveled to Jamestown, Virginia colony, being shipwrecked in Bermuda for over a year. Shortly thereafter his wife, Mary Kent, died. Stephen Hopkins remarried to Elizabeth Fisher in 1617. In 1620 he embarked with his entire family, including older children, Constance and Giles, on the "Mayflower," bound for "Northern Virginia," landing at Plymouth Rock in New England that November.

Nicholas Snow did not sail on the "Mayflower" but arrived at Plymouth 18 months later, in 1623, aboard HMS "Anne". It's not known whether he already knew young Constance Hopkins in England and followed her to America but it is certain that after 1623 Constance never considered anyone else to share her life with. They were married within a few years of Nicholas' arrival in Plymouth.

'The will of Nicholas Snow of Eastham, dated 14 Nov. 1676 and proved 5 March 1677, left livestock and household goods to his wife constant for life use and then to his youngest son Jabez, and devised various parcels of land to sons Mark, Joseph, Steven, John and Jabez. The description of land near the testator's house mentioned 'son Thomas Paine' <actually son-in-law> as an abutting owner. Nicholas also gave, after the death of his wife, the sum of ten shillings `to the Church of Eastham for the furniture of the Table of the Lord, with pewter or other Necessaries.' He named Deacon Samuel Freeman and John Mayo as executors. Letters of administration were granted to Constanta, Mark and John Snow on 6 March 1677. A lengthy inventory, including many cooper's and carpenter's tools, was sworn to by widow Constant Snow on 22 March 1677. 'Governor Bradford wrote between 6 March and 3 April 1651 that `Constanta is also married, and hath 12 children, all of them living and one of them married.'

Children: all born in Plymouth or in Eastham:

If Governor Bradford's 1651 account of 12 living children is accurate, Constance's last 3 children may have been sons who predeceased their father Nicholas Snow, without issue, and thus were not mentioned in his will; or they may have been daughters. Like many others at the time, Nicholas Snow did not specifically name his daughters in his will, only his wife and his living sons.

Josiah Paine, town clerk and historian of Harwich, wrote that Nicholas and Constance Snow had a daughter named for her mother (i.e., Constance) who was the first wife of Daniel Doane of Eastham. Daniel Doane was born most-likely in Plymouth ca. 1636; died in Eastham 20 Dec. 1712 in his 76th year. He had the following children: Joseph, Israel, Daniel, Nathaniel, Constant (twin son) & Constanta (twin daughter), Rebecca, Abigail, Ruth and Hepzibah. Daniel's first wife, by tradition Constance Snow, was undoubtedly the mother of all of these children, except Hepzibah.

Most believe that Constance Hopkins is buried at the Cove Burying Ground, in Eastham, Massachusetts. A monument is erected to her and the Snow family there. [17]

"Constant Snow which was the Wife of Nicholas Snow died about the Midle of october in the year 1677." This was less than a year after Nicholas' death in March 1677.
Date: October 1677
Place: Eastham, Barnstable County, Massachusetts[18]

Sponsored Search by Ancestry.com
DNA
No known carriers of Constance's DNA have taken a DNA test. 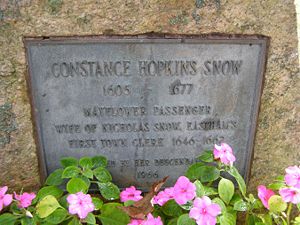 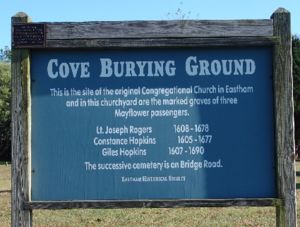 Painting of the Mayflower 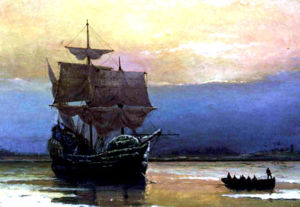 Anne B
Hi Christine, I believe what you are looking to do is remove yourself from the trusted list of these people. You can do that yourself. At the top of the page click on the "Privacy" tab scroll down to where it says "Remove yourself". It's a big "green" box. Click on that and you will be removed from the watchlist.
posted Jan 27, 2021 by Anne B

Lindy (Hull) Stuart
This biography gives two different death dates for Constance Hopkins Snow. I could find no source reference to support a death date of 25 November 1677, as is written here "Constance (Hopkins) Snow died on 25 November 1677 in Eastham, Plymouth Colony, and is buried in the Cove Burying Ground, Eastham, Cape Cod, near her late husband". I have seen several instances of a different death date, mid-October 1677. There is a source listed to which this death date is attributed. Does anyone know about the earlier death date? I want to make sure I have it correct in my records. She is my 10th great grandmother.
posted Jan 01, 2021 by Lindy (Hull) Stuart

Chet Snow
Thanks for pointing out this discrepancy, cousin Lindy. I have altered the death date to state "about 15 October 1677" as that is what the contemporary records state. This profile has been re-written and added to many times over the last 10 years and I do not know when the date of 25 Nov 1677 was added but the generally "accepted" date is 15 October 1677. She is my 8th great-grandmother.
posted Jan 01, 2021 by Chet Snow

Jen (Stevens) Hutton
I am going to be updating this profile on behalf of the Mayflower Project's Hopkins family team, in particular making sure the sources are correctly formatted and linked to online pages whenever possible. If anyone knows of additional information or sources which should be included, please message me or post here. Thanks!

I think Constance is ready for a re-write to create a more cohesive, well-sourced biography based on *her* life instead of her husband's and father's lives. If you're up to it, I encourage you to do so.

Abby (Brown) Glann
Constance' mother was Mary Unknown Hopkins, not Constance Dudley, unless some new evidence has been found. If that is the case, please share it here. Otherwise, DO NOT add Contance to Stepehn as a wife or Contance as a mother.
posted Apr 16, 2014 by Abby (Brown) Glann

Bill Jennings
Wow Abby - great job updating the merges on this page. It looks fabulous from where it was last week. Thanks, Bill
posted Jan 15, 2013 by Bill Jennings