Giles Hopkins was the eldest son of Stephen Hopkins of Plymouth. He was born in England, and came over with his father's family in the Mayflower in 1620. Along with the other members of his father's family, he survived the first winter's sickness, which swept off so many of that company. Of his boyhood days, little appears.

He appeared to have been of a retiring disposition, only forward when duty compelled. In 1637, the Pequots, a tribe of brave Indians inhabiting the eastern part of Connecticut, commenced war with the English in that region. Plymouth Colony concluded to send a company to assist in the overthrow of the Indians, so Giles, with Stephen, his father and younger half-brother Caleb, volunteered to go out in the company in the defense of his Connecticut neighbors. Happily for the company, before they were ready to go forth, the troops, under Captain Mason, had 'vanquished' the enemy, and the company was not needed.

The next year, Stephen Hopkins was allowed by the Old Colony court 'to erect a house at Mattacheese,' now Yarmouth, 'to cut hay there' and 'to winter his cattle.' It is supposed his son, Giles, went down there and had charge of his cattle. The permission given to Stephen in 1638, however, to build a house on the Cape specified that he was not to leave Plymouth permanently. It was not until 1639 that the Plymouth Colony Court authorized a permanent settlement in Yarmouth. At any rate, Giles was in Yarmouth in 1639, and with Hugh Tilley and Nicholas Sympkins, 'deposed' to the last will and testament of Peter Warden, the elder, deceased.

While in Yarmouth, Giles cultivated the acquaintance of a young lady by the name of Catherine Whelden, supposed daughter of Gabriel Wheldon. They married on October 9, 1639 in Yarmouth, Plymouth Colony, New England. They soon became the occupants of the first house (as is supposed) "built by the English on the Cape below Sandwich." Its location, says Swift's History of Old Yarmough,

"was in a field belonging to Capt. Charles Basset, about 75 yards northwesterly from the house of Mr. Joseph Hale."

The house he occupied while a resident of Yarmouth stood a little to the northwest on the declivity or knoll. It is believed by Mr. Amos Otis to have been the first house built below Sandwich, and certainly it must have been, if it were the one built by Stephen Hopkins by order of Plymouth court. Mr. Otis, in his account of Andrew Hallett, Jr., says it was sold by Giles Hopkins in 1642 to Mr. Hallett.
It would seem that Giles Hopkins was not a resident of Yarmouth in 1643, as his name does not appear in the list of those able to bear arms that year in the township, but evidence is quite conclusive that he was a resident June 6, 1644. At that date his father made his will, and several times speaks of Giles being at Yarmouth in charge of the cattle. It is probable he was not enrolled on account of being physically unable to do military duty.
Later, the town of Nauset was founded just beyond Yarmouth. Among the founders was Giles Hopkins’ brother-in-law, Nicholas Snow, married to his full-sister Constance (Hopkins) Snow. By 1650, Giles had also settled in Nauset (which was to change its name the following year to Eastham). In what year he removed to Nausett, or Eastham, is not known. He was there in 1650, occupying the position of surveyor of highways, which he subsequently occupied for several more years. For some reason, now inexplicable, his father's will, made Caleb, his younger son by Elizabeth Fisher Hopkins, his 'heir apparent,' and consequently the whole of his real estate, which was large, passed into the hands of Caleb upon Stephen's death. Caleb Hopkins, soon after his father's death in July, 1644, gave a very large tract of land to Giles, his only surviving brother, located in what is now Brewster.
As his half-brother Caleb's heir (Caleb was a mariner, and died single on the West Indies island of Barbados before 1657), Giles came into possession of several more large tracts of land. In 1659, he also had land granted him in Eastham. In 1662, with Lieut. Joseph Rogers and Josiah Cooke, he had liberty allowed him by the Colony court to look out for land for his accommodation between Bridgewater and Bay Line. In 1672, with Jonathan Sparrow and Thomas Mayo of Eastham, he purchased Sampson's Neck in what is now Orleans, then called by the Indians 'Weesquamseutt.' The tract was a valuable one; it embraced the territory between Higgin's river on the north, and the Potonumecot river on the south.
Giles Hopkins seems to have been a very quiet man, caring but little for public positions. He was in 1654 drawn into a lawsuit by the noted William Leveridge, who had defamed him. Giles Hopkins claimed damages in the amount of 50 pounds. Mr. Leveridge was ordered to pay 2 pounds and some shillings for the offense.

The latter years of Giles Hopkins' life were of weakness, so much so that he was not able "to provide for" his and his wife's support, and he agreed that his son Stephen take all of his "stock and moveable estate" and use it for his and his wife's comfortable support. The exact date of Giles Hopkins' death is not now known, but there is reason to believe it occurred in the latter part of March or early part of April, 1690. His wife, Catherine (Wheldon) Hopkins, survived his passing. The exact date and place of her death is also Unknown.

The will of Giles Hopkins bears the date January 19, 1682, and a codicil was dated March 5, 1689. It was presented for probate and proved on April 16, 1690, indicating his death shortly beforehand. The executor was his eldest son, Stephen Hopkins. The witnesses to the will were Jonathan Sparrow and Samuel Knowles, his neighbors; the witnesses to the codicil were Mark Snow and Jonathan Sparrow. Mark Snow was his nephew, being the eldest son of his sister, Constance (Hopkins) Snow. He mentions no daughters. His landed estate he disposed of to his sons: Stephen, Joshua, Caleb, and William. To Stephen he gave all his land, purchased or unpurchased, "at Satuckit" within the lines defined. To Caleb and Joshua he gave in equal parts all his purchased or unpurchased upland and meadow in Paomet, one third part of Sampson's Neck, all his land lying in Pochet, and all other land that fell to him "as a purchaser," aside from what was given to their older brother, Stephen Hopkins. To his son, Joshua Hopkins, he gave meadow at Namskaket, and after his mother's death "the housing and land" given her for her use during her life. For the support of his son, William, who appears not to have been able to care for himself, he left means in the hands of Stephen, the executor, and his widow "Catorne" [aka Catherine]. William was to have a living out of the estate "during his natural life in a comfortable decent manner," but he did not long survive his mother's passing.

The Last Will and Estate of Giles Hopkins[1][2]

“2ly my will is that my son Stephen Hopkins shall possess and Injoy all my upland and meadow Lying and being at Satuckit that is to say all my upland and meadow on ye southerly side of ye bounds of ye Towne of eastham that is to say all my right and title Intrest and claime to all those Lands from ye head of Namescakit to ye southermost part of ye long pond where mannomoyet cart way goes over to Satuckit and from thence to ye head of manomoyet river and so as our Line shall run over to ye south sea all ye Lands between thos bounds and ye westermost bounds of ye purchesers at satuckit river all these Lands I give unto my son Stephen Hopkins and to his heirs forever : and half my stock of cattill for and in consideration of ye above sd Land and half stock of cattel my will is that after my decrease my son Stephen Hopkins shall take ye care and oversight and maintaine my son William Hopkins during his natural Life in a

“3ly my will is that all my Lands at Palmet both purchesed and unpurchesed both meadows and upland and all my Lands at Pochet and my thrd part of Samsons neck and what other Lands shall fall unto me as a purcheser from ye fore mentioned Bounds of my son Stephen Hopkinses Lands and potanomacot all these fore specified Lands I give unto my sons Caleb and Joshua Hopkins to be equally devided between them: further my will is that if either of my sons, Joshua or Caleb Hopkins dye having no Issew that then these Lands which I have given them to be equally devided between them fall to him that surviveth.

“It I give unto my wife my now dwelling House and halfe my Land and halfe my orchard that is by my house: by Land I mean half my Land that is about my house both fenced and unfenced during my wifes natural Life, and then ye abovesd housing and Lands to fall utno my son Joshua Hopkins; the other half of my Land and orchard I give to my son Joshua Hopkins after my death that is to say ye other half of my Lands liying about my house.

“It. I give unto my son Caleb Hopkins one pair of plow Irons.

“It. I give unto my son Joshua Hopkins one payer of plow Irons.

“It. I give unto my son Joshua Hopkins my carte and wheels.

“It. I give unto my wife ye other half of my stock and moveables I say to my wife and son William or what parte of ye moveables my wife shall see cause to bestow on my son William Hopkins.

“It. I do appoint my son Stephen Hopkins to be my true and Lawful executor of this my Last will and testament to pay what is payable and Receive what is due.

“And to ye truth and verity hereof I have hereunto sett my hand and seal ye day and year above written.

“Signed and sealed in the presence of us, Jonathan Sparrow. Samuel Knowles.
“Ye mark of Giles H Hopkins [seal]

“Jonathan Sparrow and Samuel Knowles witnesses to this will made oath in Court ye: 16th: of April 1690 that they saw ye sd Giles Hopkins signe seal and declare this to be his Last will and testament.

“I ye abovesd giles Hopkins do declare where as by ye providence of God my Life has been prolonged unto me and by Reason of age and disabillity of Body I am Incapatiated to provide for my owne support and my wifes, my will further is that my son Stephen Hopkins from this time and forward shall possess and Injoy all my stock and moveable estate provided he take effectual care for mine and my wifes Comfortable Support during our natural Lives witness my hand and seal this fifth day of march 1688/9

According to records, Giles and Catherine (Wheldon) Hopkins had 10 children[3]

Sponsored Search by Ancestry.com
DNA
No known carriers of Giles's DNA have taken a DNA test. 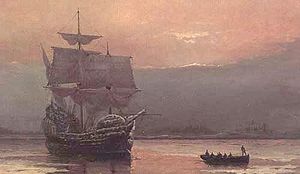 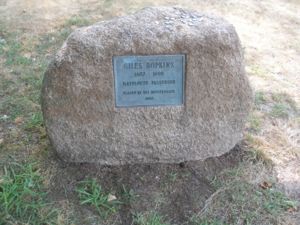 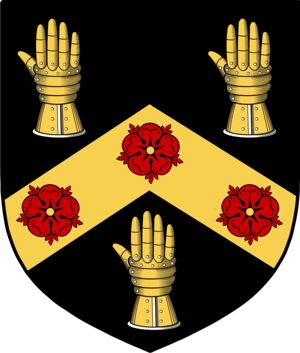