Edward Hopper was an American realist painter and printmaker.

After completing formal art studies, he made a pilgrimage of sorts to Europe, investigating the art scene there. Unlike other painters at the time however, Hopper was drawn to realistic art and was turned off by the art he encountered in France during his first visit. His etchings won him acclaim, and he soon turned to the use of oils.[5]

After returning to the U.S., he rented an apartment in New York City. He worked for many years in commercial art, and painted in oil and watercolor in his spare time. He lived simply and struggled as a freelance artist.[10]

With his work, House by the Railroad, which he painted in 1925, he began to achieve recognition.

The best known of his paintings, Nighthawks (1942), is true to Hopper's style. All of his work seems to bring about feelings of solitude, or at the least, self-reflection in the subjects, often through use of Hopper's unique use of light. Even when they are not alone in the paintings, his subjects seem to be, as the cliché says, "a million miles away." Even the roads and landscapes seem solitary, almost sad. Whether it's a quiet country road in Maine, a motel, or a busy coffee shop in NYC, they all have a sense of quiet, like the moments before dawn.[5]

On July 9, 1924 in Manhattan, New York, New York, United States, Edward married fellow painter Josephine Nivison.[8][11] She was outgoing and knew her way around the art world. A frequent model (and the only female model) for his paintings, she also worked hard to get her husband's work shown.

It may have been the small town feel or his ability to relate to the "everyman" that gave Hopper success even when the country was in its biggest financial crisis. When it was unimaginable that people were purchasing art, during the Great Depression, Hopper's art was still selling.

His continued success allowed him more time to paint and he began turning out work that would be regarded for its use of light and mood. By 1931 major museums like the Metropolitan Museum of Art were paying thousands of dollars for his works. In 1933, the Museum of Modern Art gave Hopper his first large-scale retrospective.[5]

Hopper lived and painted into old age. He owned homes in New York City and Truro, Massachusetts. All the loneliness shown in his work didn't seem shorten his life; he died in 1967 at the age of 84 in his studio in Greenwich Village, New York City.[3][5] His wife Josephine, who died soon after him, donated his work to the Whitney Museum of American Art. It is still where you can see much of it today. Edward is buried in Oak Hill Cemetery, Nyack, Rockland, New York.[12] 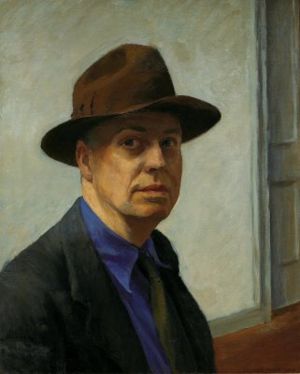 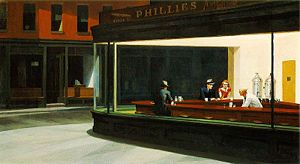 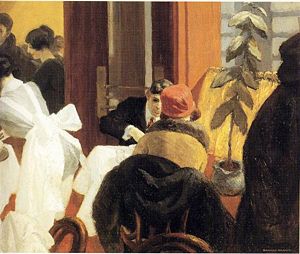 Road in Maine by Hopper 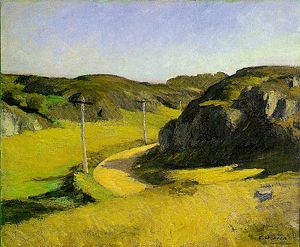 The Lighthouse at Two Lights by Hopper 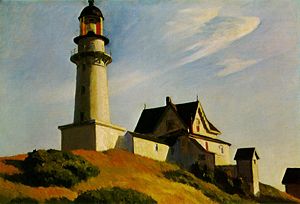 Leave a message for others who see this profile.
There are no comments yet.
Login to post a comment.
Andy Johnson
Me and Edward Hopper are 24th cousins 4 times removed our common ancestor is Adelisa de Clare
posted Jul 24, 2020 by Andy Johnson