Thomas Howard KG was a member of aristocracy in the British Isles.

Thomas was the son of Henry Howard, Earl of Surrey (d.v.p). Elizabeth I was his second cousin. He succeeded his grandfather as Duke of Norfolk in 1554.

Thomas' first wife was Mary FitzAlan, who inherited the Arundel estates of her father, Henry FitzAlan, 19th Earl of Arundel in 1556. She died after a year of marriage, having given birth to:

Norfolk was executed for treason in 1572 and buried at the Church of St Peter ad Vincula within the walls of the Tower of London.

Norfolk's lands and titles were forfeit, although much of the estate was later restored to his sons. The title of Duke of Norfolk was restored, four generations later, to Thomas Howard. 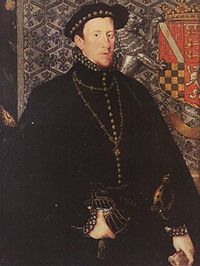 Roger Houchin
I think Howard-2204 is his son. check it out same father and mother name

posted Feb 07, 2018 by Roger Houchin
Sir William (Arbuthnot) Arbuthnot of Kittybrewster Bt
Howard-2205 and Howard-1215 appear to represent the same person because: Still the same person
posted Dec 20, 2014 by Sir William (Arbuthnot) Arbuthnot of Kittybrewster Bt
[Living Wood]
Howard-2205 and Howard-1215 do not represent the same person because: I am not aware that Howard 2205 had a son named Thomas. There is no detail on Profile-1215 to identify the Profile . It would be a leap of faith to merge the two Profiles.
posted Dec 20, 2014 by [Living Wood]
[Living Pictet]
Husband of Mary Fitzalan  married March 30, 1555 to August 23, 1557 in England,,,United Kingdommap

Categories: Dukes of Norfolk | House of Howard | Knights Companion of the Garter | People Executed by the Tudors