Edmund Howard was a member of aristocracy in England.

Edmund was born c. 1483[1] at Tisbury, Wiltshire, England.[citation needed] He was a son of Thomas Howard and his 1st wife, Elizabeth Tilney. His father was the 2nd Duke of Norfolk.[1]

Wikipedia includes interesting articles on Edmund Howard and his father, Thomas Howard, the 2nd Duke of Norfolk, as well as Catherine Howard.

It is uncertain how many times Edmund married, but his first marriage is not in dispute. All of his children were of his first (or only) marriage.

Children of Edmund and Joyce Culpepper:[1]

Edmund outlived Joyce and may have married three times. Wikipedia, citing Weir and Richardson, assigns him a second and third marriage.[2]

ask our community of genealogists a question.
Sponsored Search by Ancestry.com
DNA
No known carriers of Edmund's DNA have taken a DNA test. 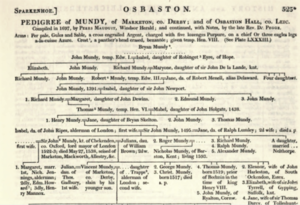 Michael Cayley
Edmund is in a prospective trail from Gateway ancestors to a Magna Carta Surety Baron. I have therefore added the Magna Carta Project as a manager. Any questions, please get in touch. Thanks.
posted Jul 29, 2020 by Michael Cayley
RJ Horace
Link in footnote 1 doesn't work now -

Categories: Field of the Cloth of Gold | Magna Carta Profiles