Henry was born about 1516/7 in Middlesex, England. The eldest son of Sir Thomas Howard, 3rd Duke of Norfolk, and Elizabeth Stafford.[1][2] He was born into an aristocratic family his paternal grandparents being Sir Thomas Howard, 2nd Duke of Norfolk, and Elizabeth Tilney. His maternal grandparents were Edward Stafford, 3rd Duke Buckingham, and Alianora Percy.[3][4] While this would serve him well in some areas, it would create obstacles in others.

The first few years of Henry's early childhood were spent in Dublin, Ireland, where his father was appointed Lord Lieutenant. When his grandfather, 2nd Duke of Norfolk died in 1524, his father inherited the title, 3rd Duke of Norfolk, and 9-year-old Henry was given his father's previous title, the Earl of Surrey. The family lived between Lambeth Manor[5] and Tendring Hall[6] in Stoke by Nayland, Suffolk, and at Hunsdon Manor in Hertfordshire.[3][7]

Henry's father made sure that he received an excellent education. He was well versed in Latin, Italian, Spanish, and French. He was instructed in proper court manners and chivalry. In 1529, Henry's father was given the responsibility, and care of His Grace Henry Fitzroy, Duke of Richmond and Somerset. Fitzroy was the illegitimate son of the King of England Henry VIII and his mistress Elizabeth Blount. The two boys became companions and friends. They accompanied the King of England, and his consort Queen Anne Boleyn to Calais for a meeting with the King of France, François I.[3][4][8]

With a kings soon my childishe yeres did passe,
In greater feaste then Priams sonnes Troye [9]

He returned to England, and his father, the Duke of Norfolk negotiated a contract for a marriage between Henry and Lady Frances De Vere. She was the daughter of John De Vere, the fifteenth Earl of Oxford. They were married in the spring of 1533, although they were still too young to cohabitate. It was about this time that Hans Holbein was commissioned to create portraits of the Earl of Surrey.[3]

During his time in Calais, Henry met Sir Thomas Wyatt who would become his poetical mentor. In 1533, Henry and Fitzroy remained in France spending time at Fontainebleau. During this time he met many poets and witnessed the beauty of French and Italian Renaissance Art. They traveled with the French King, these experiences along with meeting Sir Wyatt greatly influenced Henry's love for poetry and the Arts.[3][10]

In November of 1533, Henry and his wife Frances began living together. They had five children, Thomas, Henry, Margaret, Katherine, and Jane.[1][3]

He was given his first military role during an uprising in Lincolnshire in 1536. In 1537, Lord Thomas Darcy a prisoner in the tower at the time accused Henry of being a sympathizer. Defending his family's honor he attacked his accuser and was confined to Windsor Castle. He mourned the death of his childhood, and best friend the Earl of Richmond, who died in 1537. During that time he wrote, "When Windesor walles", which contained the verse "so crewell prison" showing his dispair. In November of 1537, he was restored to the primacy of court. He held many titles over the years and was witness to many events at court. Early in 1541, he was elected as a knight of the Order of the Garter, and installed at St George's Chapel, Windsor. He attended the trial of his cousin, the consort queen Cathrine Howard in 1541, and her execution in 1542. Mourning the downfall of the Howard's he wrote: [3]

Eache beast can chuse his feere

Henry created the iambic pentameter of a sonnet.[11] The iambic pentameter controlled the flow of a sonnet and inspired poets such as William Shakespeare. He was well known for his translation of the 'Aeneid'.[12] It was believed that his sonnets often contained real-life events and people. This allowed him to express himself without persecution using vague language. He disclosed personal and controversial information by writing them into his sonnets. He praised Wyatt's, Psalms although they were controversial covering subjects such as the King's royal power and its abuse.[13][14][15]

He grew up hearing stories of battle and triumph. The Howard's had fought to keep their positions in the court since the time of the War of the Roses. Henry strongly believed that the Howard's were different than the other nobles who were 'well versed in machiavellian of dissimulation and betrayal'. He believed strongly in the Howard family motto:[3][16]

In 1546, Henry began to insist that the Howard's had the strongest claim to control the protectorate. He began to be accused of many scandals, and the other nobles were distancing themselves from him. Evidence was presented in an attempt to prove him guilty of crimes. His home at Kenninghall and other locations were searched. His close friends were interrogated in attempts to find something to charge him with. On 7 Jan 1547/8, he was charged with a True Bill of an Act of Treason. He had his family's royal arms and insignia on the wall at Kenninghall. It was considered to be threatening the king's title to the throne and the prince's inheritance. In 1545, he had consulted the Garter king of arms at Lambeth. This was to quarter his arms with those of his ancestor's which consisted of the arms of Brotherton and St Edward the Confessor and Anjou and Mowbray all quartered. The arms of the Saxon King's heirs were considered a threat to the Tudor heirs of William the Conquerer.[3][16]

The Earl was beheaded at Tower Hill on, 19 January 1547/8. He was buried at All Hallows Barking, the Tower Hill cemetery. In 1614, his son Henry the Earl of Northampton had his body moved and re-entered in Framlingham, Suffolk at the Howard family chapel.[3][16][17][18] 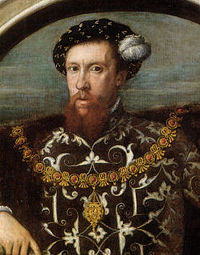 Laura DeSpain
Hi, Lucy, I will soon begin working on this profile on behalf of the England Projects Managed Profiles team. I plan to add sources and update the biography. If you have any sources or, information please let me know.

The England Project would like to manage this profile with you due to its historical significance to England. You are welcome to stay on as either a PM or on the Trusted List. Would you please add wikitree-england-project [at] googlegroups.com to the trusted list, and then set the England Project as a manager.