Howe is a major figure who commanded British troops during the American Revolution.

Sir William Howe, served as Commander-in-Chief of British forces during the American War of Independence. He succeeded his brother Gen. Richard Howe (dspm.), to the viscountcy in 1799.

William joined the army in 1745. He saw action in the War of the Austrian Succession and the Seven Years War, prior to being stationed in Boston, Massachusetts in 1775. A few months after the Battle of Bunker Hill, Howe replaced Gen. Thomas Gage as Commander-in-Chief of British land forces in America, who returned to England in October.[3]

Howe was made a Knight of the Bath on 13 October 1776,[2] but handed in his resignation around the time of his defeat at the Battle of Germantown (Oct 1777). Howe had complained of a lack of troop reinforcements,[2] but Syrett (2006), states that:

"It is likely that the resignation of both William and his brother Richard was due to their desire to hurry home to vindicate their conduct during the campaign."[6]

He returned to England the following summer, arriving in July, only to be met with censure and attacks from the press.[3] Public sentiment also impacted Howe's parliamentary seat. He had represented Nottingham as Whig since 1758, but the opposition led him to withdraw in 1780.[2] Howe, however, remained on active duty and was made full General in 1793.[3] 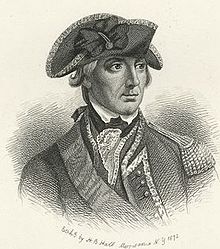