direct quote from History of Marlborough

"John Howe of Sudbury was one of the petitioners in 1657 for the grant which constituted Marlborough. He was the son of John Howe, supposed to be the John Howe, Esq., who came from Warwickshire in England, and who was a descendant of John Howe, himself the son of John of Hodinhull, and connected with the family of Sir Charles Howe of Lancaster, in the reign of Charles I."

NOTE: The "tradition" that John of Sudbury and Marlborough was the son of a John (or a James) Howe In England has not been proven. The histories of Framingham and Marlborough and the Howe Genealogies all acknowledge this tradition, but also note that all attempts to document it have failed. Extensive research has been performed on both sides of the Atlantic, without result. Mr. Richard Savage of Stratford, Secretary of the Shakespeare Birthplace Association made an investigation of the parishes of Warwickshire, which showed that there were several How's there in the 1580-1588 period, specifically John, Thomas, and Lyman of St. Nicholas Parish. A John How also appeared in records in the same parish for 1608-1609. No records of How's have been found for Hodinhull or Hodnet in Warwickshire or Hodnall in Shropshire. The Warwickshire Baptism Index, available through FindMyPast.com shows a John How , son of John How, baptized in St. Nicholas parish In Warwick on 15 Nov 1624. If he was born that year, becoming a Selectman in Sudbury in 1642 Is questionable.Any attempt to equate John of Marlborough with Warwickshire How's is speculative and conjecture at best.Howe-3137 18:14, 20 March 2016 (EDT)

"John Howe resided first perhaps at Watertown, and afterwards at Sudbury where he was in 1639. He was admitted a Freeman in 1640. ... In 1642 he was Selectman there. ... According to tradition, he was the first white man who settled on the new grant. He moved to Marlborough in 1657 and built a cabin a little to the East of the Indian planting field, where his descendants continued to live for many generations. His proximity to the Indian Plantation brought him in direct contact with the natives; and, by his kindness, he gained the confidence and good will of these neighbors, who not only respected his rights, but made him the umpire in cases of difficulties amongst themselves. In a case where a pumpkin vine sprang up within the premises of one Indian, and the fruit ripened on the premises of another, the dispute which arose between them as to the ownership of the pumpkin was presented to him. He called for a knife and split the fruit, giving half to each. This struck the parties as the perfection of justice; and put him in an immutable light."

"When in 1662, Thomas Danforth, Esq. made a demand upon the colony for a further compensation for his services, the court ordered that "he shall have granted to him so much land as old Goodman Rice and Goodman Howe, of Marlborough, shall judge to be worth ten pounds; and they are empowered to bound the same to him."

It is interesting to note that John Howe, Sr. was the founder of the Inn and Tavern business in the Howe Family. He was the owner and operator of the Black Horse Inn in Sudbury. Later, his son, Samuel gave the land to his son, David Howe, who built the Howe Inn upon it. The Howe Inn was later known as the Red Horse Inn due to a picture on its sign. Years later when it was operated by Lyman Howe and his sister, Jerusha Howe, Henry Wadsworth Longfellow was a regular customer; and, immortalized the place in his book "Tales of the Wayside Inn". It is still operated today as the "Wayside Inn", although Lyman and Jerusha were the last of the Howe Family to own it.

The history and sources for John Howe's family in Sudbury and Marlborough and beyond are all well documented. But information on his date of birth, birthplace in England, parentage, siblings, and the last name at birth of his wife Mary are all based on less solid information and matching based on name similarities, at best. This information cannot be considered confirmed. I would welcome well documented refutation of this note.Walter Howe 12:50, 24 October 2015 (EDT)

NOTE 1: Accounts differ on his death. Savage states it as 10 Jul 1678;. Hudson as 1687. Temple (History of Framingham) as 28 May 1680; Barry (History of Framingham) states his will was Jun 1689. Middlesex records (No. 8495) show that his will was witnessed by Abraham How on 24 May 1680, and an inventory was conducted on 5 Jun 1680. He must have died between these two dates, and Temple's date is the most likely one. Mass. Vital Records, Marlborough Deaths also cites this date.

NOTE 2: John Howe's Will, transcribed in Howe Genealogies (John of Sudbury) on pg. 5, states: "In witness hereof I hereunto put my hand and seal this Twenty fourth of May in the year Christ one thousand six hundred and Eighty". I would assert that the the date of death provided by Savage is not worthy of consideration. Barry's account that his will was dated Jun 1689 is also dubious. Temple's date would appear to be the more accurate and better supported of the three. Vern Howe 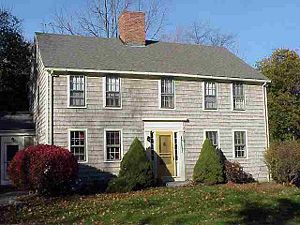 Corinne (Belskey) Kuhlmann
I adopted this profile in 2016 and have not made any changes.

Any relevant info or research is welcome.

Walter Howe
This looks like it is at least partly based on John Howe, who could have been born in Hadnall Shropshire England in 1620 (but unlikely) and died in Marlborough, Middlesex, Massachusetts in 1680. The latter's descendants are well known, but any link to the family members shown here is speculative, at best.
posted on Howe-1308 (merged) Apr 23, 2015 by Walter Howe