Thomas Hughes
Born about 1727 in Virginia

Thomas Hughes was a son of William Hughes.[1][2] Their origin is uncertain.

The name of his mother is also uncertain.[1][2]

Thomas Hughes and his seven siblings were recorded in the will of their father William Hughes of the "County of Hampshire, Colloney of Virginia", the will dated 31 Dec 1762 and proved on 9 Jun 1767.[1]

A list of the children of a "Thomas Hughes who settled in Albemarle, Virginia", can be found in "The Hughes Genealogy".[3] They were:

Land on the Upper Monongahela Waters: In 1781 a certificate was granted “Edmund West, assignee to Thomas Hughes, Senr., 400 acres on Sicamore Lick run, a branch of the West Fork [Harrison County] opposite Thomas Heughs [Hughes] Junr’s land, to include his settlement made in 1773, with a pre-emption to 1,000 acres adjoining.”[4]

"Thomas Henry (Captain) Hughes was born in 1717 in Frederick, Virginia, the only child of William Parsons and Mary Sidney Sudna. He had one son with Mary Susannah Baker on February 19, 1774. He died on May 4, 1778, in Harrison, West Virginia, at the age of 61."

Paul Hardman, Charleston, W. a. deceased after 1941 made an original and exhaustive research into Virginia land grants, transfers, wills and war records for his valuable manuscript, "Ancestry of Jesse Hughes, the Border Scout." He says, "The reader will recognize the importance of these transactions with respect to the identy of Thomas Hughes, father of Jesse, who, a few years later, appeared in the Monongalia Settlements with his family. These Fairfax land grants (page 3 of the will of William Hughes, Sr. (footnote, page 3) and the recorded sales of lands (p. 5) furnish not only the identity of Thomas Hughes, Sr., but establishes the undisutable line of the Hugeses back another generation beyond that ever recorded before. The writer made this discovery among the land grants preserved in the office of the State Auditor. Hardman makes the speculation that William Hughes was born about 1680 in Virginia, son of Jesse of Powhatan and Hughes Creek; and that Jesse was born about 1640 and could have been the son of Hugh and Ann Hughes named in the census roll at Martin's Hundred, Virginia on February 4, 1624. They had arrived sometime previous to this date on the Guifte. Thomas and Susannah Hughes and their children lived on South Branch, near Moorefield, W. Virginia about 1761. Susannah was a good looking woman, blond, blue eyes, tall and slender. In 1764 word came that hostile Indians were near, so Thomas fenced in his livestock. His home became a small blockade and Susannah melted her pewter for rifle balls. But nothing happened and they finally relaxed. One day Elias took the sheep to pasture and Jesse went to gather nuts. Since it was so peaceful he left his rifle at home. Charles was near home and the father Thomas, was in the fields near by. Jesse paused a moment to watch his mother carry corn to the hogs and as she climbed the rail fence he heard her scream and saw somethng flash toward her. She fell clutching the spike in her body. Jesse watched as a dozen Indians rushed with tomahawks and scalp knives, and then while he stood frozen, he saw Charles, a strong, blond, blue eyed boy run toward his mother. An Indian rifle cracked and Charles, fell forward. In 1778, about May 1st, while Thomas Hughes and Johnathan Lowther were out clearning fields and fencing near Wests Fort they were surprised by a group of Indians and killed. According to information contined in a booklet on page 29, this Thomas is listed in the "Hughes Family Records" written by J. Montgomery Seaver, published by the American Historical-Genealogical Society in Philadelphia, Pa.. lists the family of Thomas and his son Job Listed Thomas of Virginia as a 2nd Lt. Virginia 21st October 1775; Paymaster 7th Virginia, 1st December 1776; dismissed 8th March, 1778, killed a couple of months later in an Indian Raid. I have Not connected with research, but must be part of the family so quote below: Robert Walton (7/1/1717 Prince Edward Co-25/1/1750 Cumberland Co.) and Mary (Sallie) Hughes (11/3/1724 Cumberland Co-18/12/1821) They married in 1740. She was the daughter of Jesse Hughes from Manakintown [apparently not a French Huguenot but Welsh] and Sallie Tarleton of England. Robert Walton was the son of: Robert Walton (-1734) and Frances They lived in Prince Edward Co. VA He may have been an English soldier who emigrated from Walton Parish near London. Family tradition says he was one of three younger sons of a Lord Walton, said to have landed in Philadelphia with William Penn in the "Good Shippe Welcome" 10/3/1682 [questionable] and lived there all his life, later converting from Church of England to the Quaker faith. He bought land in Prince Edward Co. VA in 1710 and several of his sons emigrated there. Information from Walton's American Patriots. They lived on Hughes Creek on James River above Richmond VA. Children: George (VA 1741-), Signer of the Declaration of Independence who settled in Savannah GA., marrying Dorothy Camber (his granddaughter was Octavia Walton LaVert, a prominent and well-known woman to whom Edgar Allan Poe wrote "To Octavia") John (1743-), m. Elizabeth Claiborne, settled in Savannah, GA Sally (1745-), m.1 Thomas Watkins of Powhatan Co, VA, who was killed in Revolutionary War; m. 2 Joshua Morris of KY (see above) Robert, Jr. (1748-), m. Frances Carter

Captain Thomas Hughes, was killed by Indians at Hacker's Creek, Mongolia County VA, now WV, on May 4, 1778. She and her husband with her siblings and their families became quite famous as first settlers of what became central West Virginia.

Thomas Henry Hughes, a son of William and Sudna Hughes, was born in Augusta or Frederick County VA about 1717 and was killed by Indians near Hacker's Creek, Harrison County VA May 4, 1778. He married Susannah Baker about 1738 in Chester County, PA. Susannah, a daughter of Robert and Susannah (Packer) Baker, was born in 1725 in Chester County, PA and died after 1780 in Sycamore Lick Run, Harrison County.

George Washington's "Journal of my Journey Over the Mountain 1747-1748" Page 91 states: April 2,1750,"Then survey'd for Thomas Hughes a certain tract of waste & ungrand land situate in Frederick County & on Cascapehon(river)& bound as followeth beginning at red oak & white oak at the foot of a steep mountain run thence N'25W' One Hundred and Seventy,4 poles to an Elm and red Oak saplins thence N;45'W' Three Hundred and Forty",etc.

Thomas moved with his family to present day Hampshire County WV about 1750. His grant for 419 acres of land "...near Lick Branch of the Great Cacapon..." is dated November 18, 1752. Thomas moved to present day Harrison County WV about 1755. He conveyed his Hampshire county land to Henry Fry in two parcels, 200 acres February 12, 1759 and the remaining June 8, 1761. The family settled on Hacker's Creek about 1773. Various reports list Thomas as having seven to 15 children.

"Thomas Henry (Captain) Hughes was born in 1717 in Frederick, Virginia, the only child of William Parsons and Mary Sidney Sudna. He had one son with Mary Susannah Baker on February 19, 1774. He died on May 4, 1778, in Harrison, West Virginia, at the age of 61." 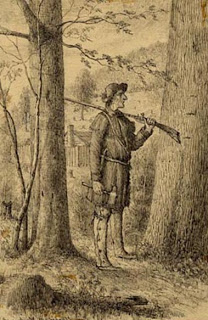 This was a tough job sorting thru ages of mismatched records. "Thank YOu" is inadequate for the mission Steve took on.

With great appreciation for a sorting well done, My wikitree Hero: Steve from Margaret Louise Drody Thompson, also known as "you" ?