Pedro Huízar, surveyor, sculptor, and judge, was born at Aguascalientes, Mexico, in 1740.

In 1790 he was commissioned by Governor Manuel Muñoz to draw up plans for the reconstruction of San Antonio de Béxar Presidio and to propose improvements for its defenses. The drawings were submitted along with estimates, but the plans were never executed.

On March 4, 1791, he was sent to La Bahía to report on the feasibility of irrigation for lands around Nuestra Señora de Loreto Presidio, but he concluded that the cost would be prohibitive.

Huízar was appointed to the position of surveyor when San Antonio de Valero Mission was secularized on April 11, 1793. He was present when Governor Muñoz distributed the lands to twenty-three adult Indians, and for his services he also received a small parcel of that land.

Huízar is most famous for the sculpture surrounding the window of the sacristy at San José Mission. There is no docu-mentation that proves that he was the sculptor, but the fact that he was living in the vicinity of San José in the 1780s supports the theories that he was the artist in charge of the rose window and the façade.

There are several variations of the legend concerning Huízar's connection with the rose window. Most of them contend that as a young man he was trained as a sculptor in Spain and sailed to the New World to seek his fortune. According to a few of the legends the rose window was so called because it was dedicated by the mourning sculptor to a lost love named Rosa or Rosita.

Is Pedro your ancestor? Please don't go away!

ask our community of genealogists a question.
Sponsored Search by Ancestry.com
DNA
No known carriers of Pedro's DNA have taken a DNA test. 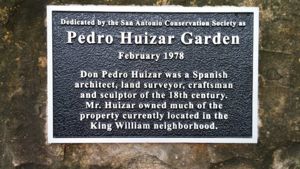 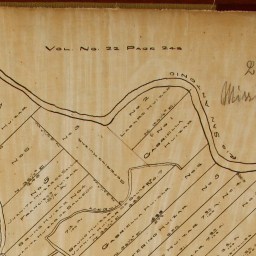 Janne (Shoults) Gorman
Pedro Huízar, was a carpenter, surveyor and even a judge, helping distribute lands after the missions were secularized and overseeing construction of gun carriages to refortify the Presidio de Béjar in the late 1790s.

Huízar is typically credited with carving the ornate Rose Window outside the church sacristy at Mission San José. The window measures about 10 feet tall and nearly 6 feet wide and is one of the most distinct architectural features at the heavily visited mission. Armando Alonzo, an associate history professor of Texas A&M University cited a July 1779 census record stored in Seville, Spain, that indicated Antonio Salazar, an associate and friend of Huízar, was recognized as an albañil, or builder, and Huízar as a sculptor. The Franciscan College of Zacatecas was responsible