He left England for Australia on the H. M. frigate Guardian in 1787, but only made it as far as the Cape of Good Hope, because the vessel was struck by an iceberg. He made it to Australia in 1788, arriving at Port Jackson, New South Wales on the Lady Julian.[1][2][3]

Hide Details Source: Australian Dictionary of Biography. Online edition. ‎[database - on-line]‎. Canberra: Australian National University, 2006 Text: As a superintendent of Convicts he was employed to go to New South Wales in the frigate Guardian which was taking convicts and supplies to succour the first settlers; after the ship was damaged near Cape Town Hume completed his journey in the Second Fleet ship 'Lady Juliana'.

Andrew Hamilton Hume (1762-1849), superintendent of convicts and farmer, was born on 24 June 1762 at Hillsborough, County Down, Ireland, the eldest son of James Hume, a Presbyterian minister, who had moved from the Scottish border in 1746 and settled at Moira. His education was sufficient to procure him a commission in the Moira Regiment of Volunteers in 1782. After a duel with his superior officer in 1786 at Greenwich, he was cashiered and was then employed as a superintendent of convicts at Woolwich. In this capacity he was employed to go to New South Wales in the frigate Guardian which was taking convicts and supplies to succour the first settlers; after the ship was damaged near Cape Town Hume completed his journey in the Lady Juliana, and arrived in Sydney in June 1790.

As Hume was reputed to understand farming, Governor Arthur Phillip immediately sent him to Norfolk Island to help Lieutenant-Governor Philip Gidley King in the production of flax. In 1791 Hume reported progress to Phillip and asked for further aid in the form of looms, spinning wheels, and in particular, weavers' brushes, oil and different sets of stays. The flax industry, however, failed to come up to expectations and in 1792 Hume returned to Sydney. Lieutenant-Governor Francis Grose appointed him superintendent of convicts at Toongabbie and next year granted him thirty acres (12 ha) of land there. He met Elizabeth More Kennedy, a clergyman's daughter who had come out from Kent with her brother in 1795, both as free settlers, and married her on 29 September 1796. They had five children, of whom four survived: Hamilton born 1797, John Kennedy, shot by bushrangers at Gunning in 1840, Francis Rawdon, and Isabella, who later married George Barber of Glenrock, Marulan.

In 1798 Governor John Hunter appointed Hume government store-keeper at Parramatta but soon afterwards Hume was tried for 'malversation of public property in the Parramatta Granary'. Although acquitted he was dismissed for 'irregularities in his administration'. In 1800 he was appointed superintendent of livestock but was soon being tried on a charge of rape. Again acquitted he was again dismissed, and was described by Governor King as a 'worthless character'. Upon the establishment of the Orphan School his wife had been appointed as senior mistress, but because of what she described as 'some unpleasant domestic circumstances and increase of family', she had to retire. The family then appears to have settled on the Hawkesbury River but were dogged by misfortune losing everything twice by fire and once in 1806 by floods.

After King left Hume ostensibly supported Governor William Bligh but after his arrest signed the congratulatory address to Lieutenant-Governor George Johnston in 1808. Johnston reinstated Hume in his former position as superintendent of stock and, according to Commissary John Palmer, granted him two cows from government stock; but when Lieutenant-Governor Joseph Foveaux arrived Hume was dismissed again for 'indications of dishonesty'. According to his wife they would have starved, especially after the 1809 floods, had it not been for 'the cow' given by Johnston. Mrs Paterson, who had been a patroness of the Orphan School, recommended her for a grant of land and Lieutenant-Governor William Paterson gave her sixty acres (24 ha) at Prospect Hill, a grant which Macquarie confirmed. The family gradually achieved the respectability that Hume's former conduct had jeopardized; in 1811 Macquarie granted him a further 100 acres (40 ha) at Appin.

After Macquarie departed Hume acquired more land at Appin, concentrated on grazing and came to support the 'exclusives'. In 1825 he threatened to seize stock on agistment from George Crossley unless he paid his debts. Hume's name appeared on the list of grand jurors in 1826. In later years he supported a Presbyterian petition for the reinstatement of two ministers who had lost their incumbencies. In 1842 he supported the agitation for the importation of cheap coolie labour. He died at his daughter's residence, Glenrock, on 23 September 1849, his wife having predeceased him by two years.

posted 6 Aug 2011 by Lucinda Catchlove
Login to add a memory.
Is Andrew your ancestor? Please don't go away!

ask our community of genealogists a question.
Sponsored Search by Ancestry.com
DNA
No known carriers of Andrew's DNA have taken a DNA test. 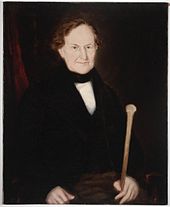 Andrew is 24 degrees from Donald Howard, 21 degrees from Julia Howe and 19 degrees from Henry VIII of England on our single family tree. Login to find your connection.