This profile is part of the Hunt Name Study.

Thomas Hunt was a Virginia colonist.

Thomas was born in 1730. Thomas Hunt being born in England is a guess because no one has proven that he was born there or in Virginia or Maryland or...

Thomas may have been married to a Mary - this note is on the Jackson family Bible transcription page. If so, was she the mother of Stephen? His marriage to Ann Henson has never been proven, yet it is accepted by most Hunt Family researchers.

Lived in the part of Bedford Co. Va which was later divided to make Franklin Co.

Had lands in both counties after the partition but sold most in old Bedford County. Moved to Liberty in Franklin, which became Bedford City VA.

Pasted in a Jackson Family Bible owned by Mrs. Wilkes of Springfield, TN is a list of 14 Hunt siblings; this list was transcribed by Esli S. Jackson in 1859 but originally recorded around 1830 in Franklin County, GA. The only known direct family reference to Thomas Hunt as being the father of these 14 siblings comes through an account of this bible, described by William M. Hunt of Fairport, NY: Family genealogist Jewell Eubank had copied the list after the bible was discovered by researchers in 1959; she stated at the time there was a note in the margin stating "Thomas Hunt of England was the father." However, the note was not found by William M. Hunt when he reviewed it in 1985. When questioned, she said it may have been written on a scrap of paper, but to date, the note has not been found.

The birthplace of the siblings is documented through the Revolutionary War pension application of Esli Hunt, Sr. the 3rd son, who testified as being originally from Bedford County, VA.[1]

Researcher Doug Hunt has created a timeline for Thomas Hunt's life, you can view it by clicking the PDF Icon to the right.

There are numerous references to a Thomas Hunt having lived in Bedford County, VA in the middle to late 18th century. Caution is advised, however, since definitively linking all mentions of "Thomas Hunt" to a single person is difficult without available supporting evidence.

Tithe lists and land entry records indicate he may have arrived around 1752 from Lunenburg County. Also, Virginia statues document a Thomas Hunt having received compensation for serving in the Bedford County militia during the French and Indian War. Later, land records indicate he lived just south of the Staunton River in present day Franklin County; he was a Tory, having been called to appear before the court in 1778 as "Unfriendly or Enemies to the United States of America" in and later in 1780 pleading guilty of treason for taking oath to the King. He is listed among 16 prisoners in Richmond having received pardon for the same charge. Property tax records also document "Dr. Thomas Hunt" still living in Franklin County, VA in the 1780s. However, there is no clear indication on when he may have died or if he moved from the area. - Doug Hunt

Imprisonment for Treason and Pardon

Various state and local records explicitly show that Thomas Hunt was a Tory who was involved in a coordinated plot against the American cause that was foiled by the local militia in August 1780. Thomas and his cohorts were rounded up and captured by Charles Lynch and the Bedford militia after their names were discovered on a list of men who pledged loyalty to Britain and were conspiring to destroy lead mining operations to the west in Montgomery County. Prisoner receipts and petitions show dozens of men had overrun the local jail and among them Thomas Hunt was listed as spending 41 days there. After pleading guilty in the local court, 16 were sent off to Richmond for further trial; however, they were spared any further punishment, receiving pardon through an act of the General Assembly. A lingering consequence of Thomas' imprisonment was the bond secured from him by unscrupulous Richmond attorneys, having charged 1,000 lb tobacco per defendant for a trial that never happened; the charges were later dismissed in Chancery court. - Doug Hunt

Thomas Hunt lived south of the Staunton River along a branch of Merrymans Run close to Hale's Ford. There are three distinct tracts of land associated with Thomas; the first and largest at 530 acres is presumed to be his main residence. It was surveyed by Hunt but granted to James and Robert Donald in 1773, having been transferred to them as security for a debt due; the tract was then sold to John Hook in 1787, a prominent merchant in southern Virginia who established his personal plantation in 1784 just north of Thomas. Hook later described the tract as Hunt's place and as being "improved with two good barns, and a good log corn house, negro cabbins, overseer's house." The second track for 304 acres was surveyed in 1774 and granted to Thomas Hunt in 1780. However, it was quickly sold to Benjamin Clardy in 1783, son-in-law of another neighbor John Boothe. Notably, the sale was disputed in court by Clardy due to the fact that Ann Hunt would not agree to relinquish her dower in the land, though the case was eventually dismissed. The third track for 300 acres was surveyed by Thomas in 1785 but also transferred to John Hook by 1788; there is little evidence that either of these tracts were ever occupied by Thomas or his family.

A fourth parcel of land is possibly tied to this Thomas Hunt; there is record of the sale of Lots 7 & 10 in the establishment Town of Liberty in 1785 to a Thomas Hunt, but it has not been determined whether this is definitively the same person. - Doug Hunt

A majority of the lands associated with Thomas Hunt south of the Staunton River eventually ended up in the hands of John Hook, who was buying up surrounding lands for the purpose of expanding his personal residence and plantation during the late 1780s. John Hook was a wealthy merchant who operated several stores in the area and was involved in the tobacco trade through the James and Robert Donald Company. It is notable that Hook kept detailed records of his business which are still available, archived at the Rubenstein Library at Duke University.

There are several references to Thomas Hunt in these records, including descriptions in land inventories, entries from daybooks, debt obligations, and ledgers from Hook's store at his Hailsford Plantation. Additionally, these records provide several key links to the 14 siblings. "Dr." Thomas Hunt, Joel, Jesse, Uriah, and Benjamin all are listed with accounts at John Hook's Hailsford store - only a mile from Thomas' land; also Jesse and Uriah are documented together providing "waggonage" for Ben Clardy and John Booth, neighbors of the Staunton River Thomas Hunt. Benjamin is later shown to have been employed by John Hook, possibly even as a store clerk at the Hailsford store. Thus, the John Hook papers are an important source for documenting a link between the 14 siblings in the Jackson family bible and the Thomas Hunt who resided south of the Staunton River. - Doug Hunt

Original copies are available for several documents signed by a Thomas Hunt of Bedford, VA; these signatures can be used to link records that would otherwise be difficult to confirm were of the same person. Thomas signed with a unique paraph type flourish that looped around and under the "t" in Hunt. This type of flourish can be found in documents relating to the lands south of the Staunton River as well as court records pertaining to Toryism, showing these were from the same person. Also, they demonstrate Thomas resided in the area from a period from at least 1771 through 1795. However, a signature for a Thomas that appears alongside Stephen Hunt - who is often cited as a son of Thomas - does not contain the flourish and appears otherwise to be from a 2nd person; this along with the lack of documentation linking the two suggests that Stephen is not related to the Staunton River Thomas Hunt. - Doug Hunt

Documented Links Between Thomas and "The 14": When looking comprehensively at the available records for Thomas in Bedford, VA, strong evidence can be assembled that suggests he is the related to the 14 siblings:

DNA to another Hunt Family in Bedford?

"I...think that my Mary Hunt was a sibling to Stephen Hunt. I also think they were related to:

I have gone over and over the records and it does not support that Absalom and Wat were children of John and Eliz Mary Tyus. That is incorrect. William Walton lived 1779 South side of Staunton and wanted to form a new county. In 1782 William Hunt lived South of Stanton River and signed a petition to divide Bedford. At the present time I’ve penciled in the possibility that Mary descends from William Hunt." - Sharon

This information from Family search record and is most probably Not this Thomas's wife anne, though further research is needed as we don't know much about his wife or her burial.

If this is Anne who married Dr. Thomas from Debford, did she leave the colonies to avoid the war? Is the time she was in England encompass the times that he was imprisoned? Curious.

This appears to be two different families misattributions. The family of Dr. Thomas Hunt of Bedford County, Virginia who married and Ann (presumably Henson) has been incorrectly connected to the Family of Thomas Elwwod Hunt of Westchester, NY. The DNA of Thomas Elwood's descendants do not match the Dr. Thomas Hunt of Virginia Genetically. Group 27, Hunts Point, NY - Haplogroup I-M253

The name Elwood has not been associated with Dr. Thomas Hunt of Bedford County Virginia, nor has the last name of his wife Anne been associated with the name Mattingly. If there is documentary evidence of this name for Ann it would smash down a brick wall which has eluded researchers for centuries! Please post if there is anything.

Please see the Origins of the "Hunt 14", the children of Dr. Thomas Hunt of Bedford County, Virginia and the Jackson Family Bible Please see also the Hunt DNA project for the Hunt 14,

Sponsored Search by Ancestry.com
DNA Connections
It may be possible to confirm family relationships with Thomas by comparing test results with other carriers of his Y-chromosome or his mother's mitochondrial DNA. However, there are no known yDNA or mtDNA test-takers in his direct paternal or maternal line. It is likely that these autosomal DNA test-takers will share some percentage of DNA with Thomas: 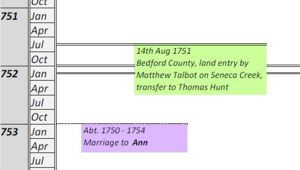